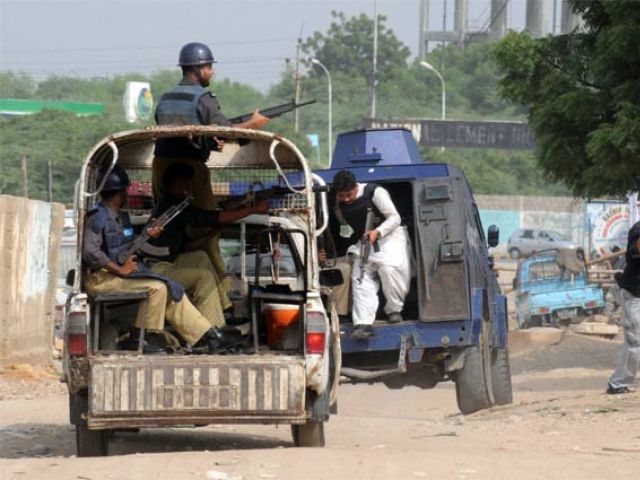 KARACHI: A retired major of the Pakistan Army was shot dead on Saturday in Karachi’s Defence Housing Authority (DHA) area in an attack claimed by the Tehreek-e-Taliban Pakistan.

Soon after the attack on Major (retd) Ahsan Raza, 52, in DHA Phase-I, Tehreek-e-Taliban Pakistan (TTP) in a statement claimed responsibility.

“Two unidentified gunmen on a motorbike opened fire at Raza, in the early hours of Saturday,” a duty officer at Defence Police Station told The Express Tribune.

The body of the deceased was shifted to Jinnah Postgraduate Medical Centre (JPMC) soon after the incident.

TTP spokesperson Muhammad Khorasani in a statement said that the special task force unit of the group carried out the attack in Karachi, along with an attack on a deputy superintendent of police (DSP) in Peshawar, and a blast in Quetta which killed one Frontier Corps official.

At least one soldier was killed and four others wounded including a passerby when a bomb exploded at a paramilitary checkpoint in Quetta, police said.

“It was an IED (improvised explosive device) which exploded the moment soldiers reached the checkpoint,” Khattak said.

He added the blast killed one soldier and wounded four others including a teenager passing the site at the time of the explosion. “(The) condition of another soldier is also critical,” Khattak said.

Sajjad Ahmad, a senior official from FC, confirmed the attack and casualties.

Thousands of paramilitary troops are deployed in troubled areas of the country to carry out security checks and to help police in maintaining law and order.

Deputy Superintendent of Police (DSP) Jandad Khan, of the Counter Terrorism Department (CTD), was critically injured when unidentified gunmen on a motorcycled opened fire at him in Peshawar.

According to police officials, the targeted attack came in the early hours of Saturday at Faqir Kalay police station in Peshawar’s Faqirabad area.