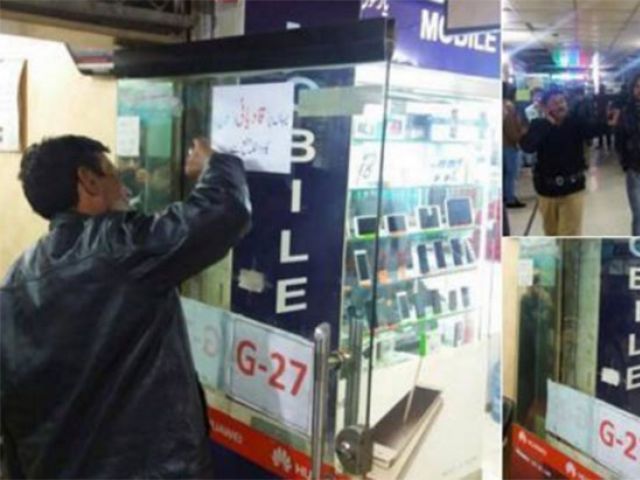 LAHORE: The district administration in Lahore on Thursday removed anti-Ahmadi posters and stickers from the city’s largest mobile and computer equipment market.

Numerous shopkeepers in Lahore’s Hafeez Centre, located in the Gulberg locality, displayed signs and stickers prominently on their shop windows, inscribed with statements such as, “We do not do business with Ahmadis” or “Ahmadis are not allowed”.

“Most Ahmadis do not disclose their identity,” former president of the Hafeez Centre, Malik Kaleem said, while confirming that some shopkeepers had displayed such messages on their shops and offices as part of their belief.

“It is an ongoing campaign in connection with local government elections,” he said.

Maqbool added, “The city government was removing unwanted signs and stickers from the provincial capital to make the city beautiful.”

The action, however, is most likely linked to the social media outrage that unraveled on Twitter and Facebook after pictures of the posters first surfaced a few days ago. The hashtag #IStandWithAhmadis is trending now on Twitter with many lauding the efforts of the Punjab government for having the signs removed.

@Razarumi thank you for pointing it out. DCO Lahore took a prompt action and got it removed immediately @theRealYLH pic.twitter.com/guFGwLLr2b

Government of Punjab has removed the sticker. Thanks to @Razarumi (roomie) /#IStandWithAhmadis pic.twitter.com/5aaeHZh3Y9

#IStandWithAhmadis becoz OTHERWISE I will be standing against the peaceful teacings of Islam.

#IStandWithAhmadis Our political parties R cowards & do not have courage to take a stand against mullah mafia.

#IStandWithAhmadis Love for All, Hatred for None is a great slogan…I stand with Ahmadis

#IStandWithAhmadis because we believe in peace, live & let live .

#IStandWithAhmadis Because we spread Love n peace around the world by establishing mosques. pic.twitter.com/BCFhGvWDAx

Well done all those who spoke up and reported it, and @GovtOfPunjab for taking action #IStandWithAhmadis #Pakistan https://t.co/kTISEyzPXi

#IStandWithAhmadis 'cause why wouldn't I??

I salute those brother and sisters who joined us with #IStandWithAhmadis trend, may God bless you and reward you for your courage n support