Up in arms: Protesters decry state of fundamental freedoms in nation

Up in arms: Protesters decry state of fundamental freedoms in nation 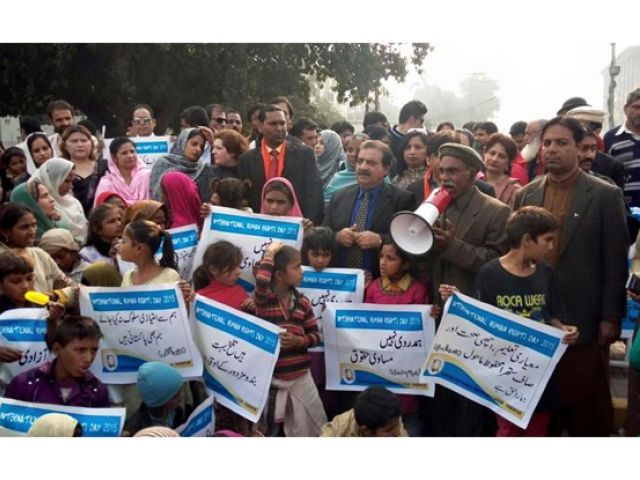 LAHORE: Citizens of all ages from some of the most marginalised sections of society came together on Thursday at Charing Cross to stage a protest demonstration in connection with Human Rights Day.

“We want the government to invest more in the health and the education sectors,” Kalsoom Javed, a gypsy, said. She said the community dwelled in a slum near Ravi River, “We have nothing. Not even clean drinking water or schools,” she said.

Similar sentiments were expressed by rights activists on the occasion. “Facilities are missing in education and health here in Lahore right under the nose of the chief minister,” Civil Society Network president Abdullah Malik said. He said it was difficult to imagine the state of affairs prevalent province-wide given the situation in Lahore. Malik said that it was essential for the government to spend at least 6 per cent of the budget on education and seven on health. “We need to reduce the gap between the rich and poor,” he said. He also commented on the growing insecurity across the nation for journalists and rights activists. “We want the government to immediately introduce a bill for the protection of journalists and human rights defenders,” Malik said.

Centre for Human Rights Education Pakistan director Samson Salamat also spoke regarding the shrinking space for human rights in the country. “It is a very sad fact that the human rights situation is taking a turn for the worse with each passing day,” he said. Salamat said fundamental freedoms were in peril.

“The worst part is that the space for civil society is shrinking day by day. This does not bid well for society,” he said. Salamat said the government should turn its attention towards protecting human rights defenders.

Pahel Pakistan chief executive Deedar Ahmed Mirani said the conduct and policies of the government towards civil society organisations were worrisome. “This is has a direct impact on civil liberties,” he said.