Colours of democracy: As city goes to polls, its better half steps out

Colours of democracy: As city goes to polls, its better half steps out 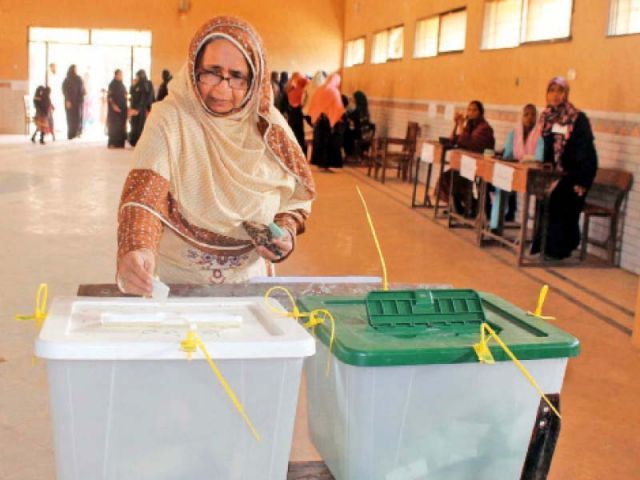 The city elected its local representatives during the third phase of the local government (LG) elections on Saturday with the support, of not only men, but an overwhelmingly large number of women.

Many parts of the city witnessed longer lines outside female polling booths as compared to the male ones.

In District Malir’s Ibrahim Hyderi area, more female voters had lined up outside Morro polling station making it the only constituency in the district with a turnout of nearly 70 per cent.

Fatima Kutchi, 82, appeared too frail to even walk but she flashed a victory sign from her wheelchair as she waited for her turn. “I have come to vote against those who have given nothing [to us] except miseries,” she said.

According to Fatima, the sea washed away her husband three decades ago while he was fishing in Kajar Creek. She ended up fishing in his place to raise her family. “My relatives tried to convince me to get married again but I refused and told them I will survive only for my kids,” she said. Her family has always voted for the feudal lords but, she claimed, they have never worked for the welfare of the fishermen.

“The broken roads, overflowing gutters, the narrow and unhygienic streets, and wandering children who don’t go to schools show what the situation is like in my area,” she pointed out. Other women in the queue shared how they made sure everyone in their house stepped out to vote.

The women in Lyari also started making their way to the polling stations from early in the morning and the momentum continued until polling ended at 5:30pm.

In fact, there were so many of them in most UCs of Lyari that the polling staff felt the need for female law enforcers to help manage the crowd. Neither any women police nor any female Rangers personnel were deployed in Lyari. “This rush delays the voting process,” pointed out UC-2’s presiding officer Abdul Rauf. “The female staff is limited and it handle the rush in such short time.”

Several arguments also broke out as the women vehemently supported their candidates. “The women of Lyari want change with their votes,” said Asma Baloch, a Rangiwara resident. “But our right to vote is not being utilised properly.”

Many women had stepped up to make sure their neighbours made it to the polling stations. “I have brought around 100 voters and many more are still waiting outside the polling station,” said Hajira Bibi, a resident of alFalah Road. Every eligible woman voter was interesting in casting her vote, she said proudly.

Even in District Central, the women were willing to travel some distance to reach their polling station. “This is the second time that I am casting my vote in Nazimabad even though I live in Federal B Area,” said Mahreen Khan.

A group of seven women from Macca Tower Apartments in Nazimabad decided to make a day out of it. The housewives made their way to their polling station in Nazimabad No. 3 after taking care of their chores at home. They wanted to come together to send a message to those people who stay at home that voting matters. They also wanted to prove that women also possess political awareness.

“Voting for a candidate is a choice to choose your representative and it is a national responsibility,” said one of the women, Samina Shakir. “After voting, we have done our job and now the candidates have to fulfil their promises,” she added. “Otherwise, we will vote for a different party next time.” Her neighbour, Sajida, pointed out how it is the woman, and not the man, who suffers from poor local governance. She has to spend the entire day at home without electricity, she explained.

Not all parts of the city were, however, receptive to female participation. Areas in District West, particularly those populated by Pakhtun families, witnessed very few women making their way to the polling stations. Women in Kati Pahari area also faced some difficulties as their polling station in Mustafa School was abruptly changed to another location. The district returning officer, Murad, explained it was due to security concerns.

No provisions for the elderly