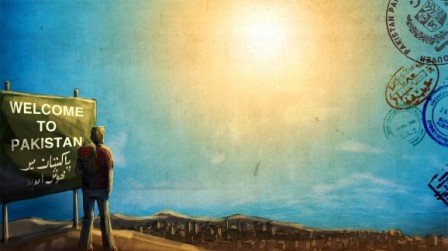 Despite the threat of violence, life goes on for foreigners living in Karachi.

Anastasia Symmons was at one of Zamzama’s numerous upmarket coffee shops when a bomb tore through a chehlum miles away at Shahrah-e-Faisal on February 5. Phones bleeped around her as the information passed through the city. Symmons tried to understand the particulars of the situation so she could then explain it to her family back home in Australia. She described the situation as “kind of strange”, the feeling that life goes on, even in the shadow of the threat of violence.

Symmons came to Pakistan for two months to intern at an NGO and found herself sharing a flat with a Lithuanian technological consultant, Andrius Bagnodavicius and Sri Lankan Human Resources manager Shayamalee Herath. Symmons’ NGO is run by Australian Jeremy Higgs, who has been based in the country for three years now. Herath’s experience of the country has been most harrowing.

Although she comes from a country plagued with violence for many years, when the Sri Lankan cricket team was attacked in Lahore by armed gunmen in March 2009, it was particularly devastating for Herath as her cousin was part of the team and on the bus. “I think it is the most shocking moment I have experienced in my life so far. There are lots of bomb blasts in Sri Lanka but none of my relatives or friends was affected by them. But, in this Lahore attack, one of my relatives got injured and received a bullet wound,” says Herath.

This happened days before she came to Pakistan. Higgs came to Pakistan in 2007, just before the first attack on Benazir Bhutto, at the rally marking her return to the country. “I have been through many different situations. Just before I came there was an attack on Benazir Bhutto and a month later, she was assassinated,’ he says. There have been several blasts in the city since his arrival but Higgs maintains, “There has never been a point in time that I wanted to go back.” For Bagnodavicius, the security crisis has been a learning experience.

After two years in Karachi, he is, predictably, neither as shocked nor unsettled by bomb blasts and unrest as he was in the initial months of moving. He feels that he has learnt to “differentiate between measured risk and unmeasured risk.” Other than the overarching security problem, outsiders to the culture require an initial period of acclimatising to a culture both different to their own and also one that is rarely approached without preconceived notions.

Social gaffes are unavoidable and Higgs took some time to remember not to shake hands with women, as instructed by his colleagues, despite the fact that this dictum probably tells you more about Higg’s male colleagues than about Pakistani society. After three years here, Higgs finds that living standards in Karachi are “comparable” to those of his hometown. Sydney. “You can get mugged even in Sydney,” he says. What he most appreciates about Pakistan is the hospitality of the people.

“I have been lost several times and people have been more than happy to help. They would hop on the rickshaw and direct the driver towards the destination.” Being a male, Higgs finds it easier to live in Karachi, but at the same time he feels “it is harder for the girls.” Symmons agrees, despite the fact that the closest thing to harassment she’s experienced was the passengers of a car pulling up to hers and whistling. Herath is more accustomed to the third world, however.

“I don’t see any difficulty in living in Karachi as an independent girl, but I don’t know about other parts of Pakistan. Gender doesn’t matter if we know how to adapt to the culture and respect others,” she says. If she has one complaint, though, it’s that people in Pakistan have the annoying habit of lighting up a cigarette in public places. Bagnodavicius has other reservations about the city. He feels it can be difficult to get around in the absence of road signs. The cultural differences have also been a big part of his experience, for example, he shares:

“I could never imagine a Lithuanian woman older than my mom working for me.” Everybody likes to get away from the hustle and bustle of the city life and it is no different for foreigners who live in the urban areas of Pakistan. Almost all of the above mentioned people agreed that their best experience in Pakistan was a visit up north. Herath says her visit to Taxila filled her with respect for Pakistan. “I’m a Buddhist and Taxila represents our real Buddhist culture,” she says,

“I am really grateful to the Pakistan government for protecting our significant Buddhist history.” It is then a heartening lesson to see that fear can always be overcome with familiarity, as Higgs observes, “The Australian perception of Pakistan is like the Pakistani perception of Afghanistan.”