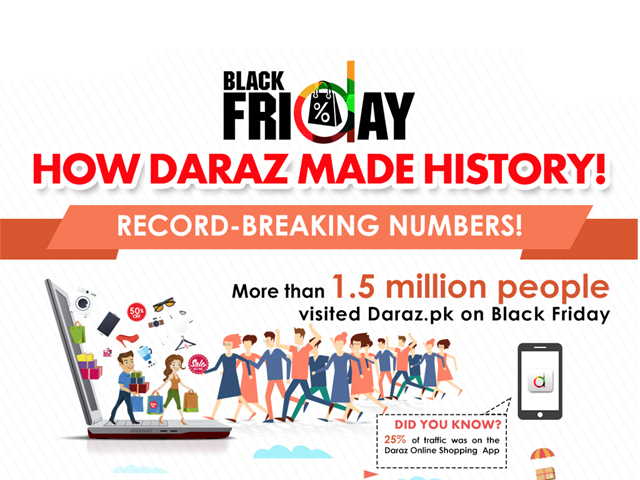 Within the first five minutes all the iPhone 6s handsets, available at 26% discount (Rs18,000 off), were sold-out!

“At midnight, as we celebrated leading to the countdown, we knew that this would be the biggest sale event for Daraz till date. We watched as the number of visitors on Daraz soar. We gasped in awe and our hearts beat faster as we knew this was way too many people, way too many people,” said Muneeb Maayr, CEO Daraz.pk

On November 27, Daraz.pk hosted Pakistan’s first Black Friday and broke all national sale records. With 1.5 million visits on the website and 55 times more orders than a regular shopping day, the event was a complete success.

Here is how it happened:

The shopping frenzy started at 12 am on November 27 and there was an influx of thousands and thousands of people on to the website. The traffic inflow was so high that, for the first couple of minutes, the international cloud servers assumed Daraz was under hacker attack and started to protect the website, shutting off and choking customers at checkout.

Within the first five minutes all the iPhone 6s handsets, available at 26% discount (Rs18,000 off), were sold-out and the number of men’s shoes sold on the day were equivalent to the sale made in three months!

“On mobile phones, more Microsoft phones sold in a single day than any retailer has made possible in the offline space in Pakistan. On the commercial side, we sold out thousands of products from completely new brands like Jackpot (for small appliances, which literally had a Jackpot through the sale) and Elite, which sold countless heaters and water dispensers,” he said.

Daraz.pk also revealed that it sold more fridges, washing machines and gaming consoles on Black Friday than it has in the history of Daraz!

“The first time ever, leading appliance brands like Dawlance, Kenwood and Westpoint collaborated with Daraz at scale and liquidated thousands of products for the brands in the lead up to winters, completely unprecedented at this scale even in the offline market. And fashion sales on the day were almost as much as the total sales made in two months,” said Muneeb.

Interestingly, the Easypay discount option saw a shift in consumer behaviour – where previously 95 per cent payments were cash-on-delivery, one third of the payments made on Black Friday were debit/credit card payments – a clear demonstration of more reliance and trust in the company. Another interesting observation was the spike in the use of the mobile app – 25 per cent of the total visits on Daraz.pk were from the Daraz app.

Black Friday saw unparalleled awareness built around completely new brands and services. The event build the brand of Easypay as an electronic payment gateway and PTCL sold unparalleled digital products, becoming the best-seller of the day. A large number of amazing bundles from Ponds were also sold out within a few hours, becoming one of the top-selling products on the website.

In addition to this, before Daraz’s Black Friday, very few knew that MediaTek chips are the backbone of most Android phones sold in Pakistan, and a majority of the phones sold contained MediaTek chips. InnJoo, another smartphone brand that sells exclusively on Daraz sold out on all three new model releases.

“Seeing viral videos of women fighting over deals at malls in Pakistan and newsletters from leading brands in Pakistan also announcing a Black Friday, we now know we have created a new landmark in retail in Pakistan,” said Muneeb.

Following in the footsteps of Daraz.pk, many companies, including major offline stores, conducted their own Black Friday sales. This was also the first time #BlackFridayPK trended in Pakistan.

“Super proud to break records. Records for more products sold ever on a single day of ecommerce in Pakistan. Record of the most number of phones or appliances sold by any retailer in the offline space in one day. Record of over a 3rd of the payments being electronic prepayments, and record for the number of smiles we brought to people who won all the deals. We made history and every one of the 500+ employees at Daraz has a reason to hold their heads high. Our hard work paid off and our customers came out as winners! May we have more to come,” he concluded.