Use of animal­s in campai­gns also talked about at semina­r
By Our Correspondent
Published: December 4, 2015
Tweet Email 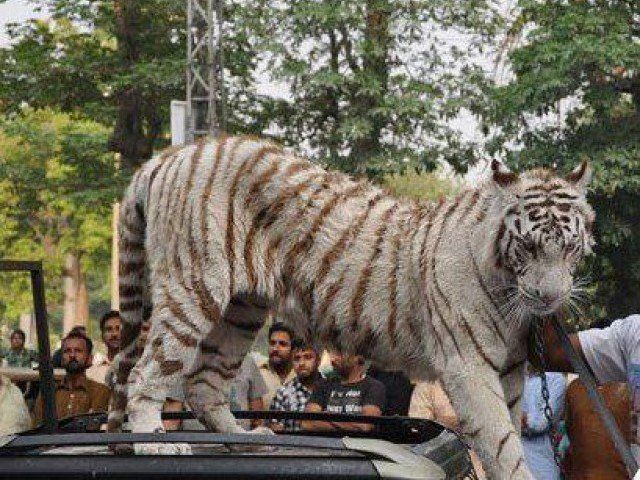 Use of animals in campaigns also talked about at seminar. PHOTO: PUBLICITY

LAHORE: The government’s alleged lack of seriousness on issues of environment, particularly, climate change, and the use of wild animals in electoral campaigns were talked about on Thursday at a seminar organised by the WWF-P.

“In the 2013 general elections, a tiger was routinely paraded by the Pakistan Muslim League-Nawaz (PML-N) members for their campaign,” WWF-P biodiversity director Uzma Khan said. She said this had prompted rights human rights activist Faryal Gauhar to file a petition in the Lahore High Court (LHC).

The practice continued unabated in subsequent polls in violation of the court’s prohibition. A lion cub was used to attract people on November 1 at Law Minister Rana Sanaullah’s rally in Faisalabad. In another incident, a white tiger was brought to a PML-N rally organised on October 27 in Gujranwala.

Khan said animals used in electoral campaigns were privately-owned and kept at farmhouses. She said the WWF-P had conducted a survey of 108 such facilities after acquiring data on registered farmhouses. Of these, she said, 47 big cats were being housed across eight facilities. “All of these have been violating some basic laws on upkeep of animals kept at a private facility,” she said. Khan said this also violated the Convention on the International Trade of Endangered Species, to which the nation was a party. She said the limited capacity of the Wildlife Department was one of the reasons behind the violations. “The department does not have the funds for extensive monitoring,” Khan said.

“Pakistan’s Intended Nationally Determined Contributions, which were submitted late, do not stipulate a baseline for current carbon emissions,” Arshad said. He said Pakistan contributed 0.8 per cent of the world’s carbon emissions. “The INDCs failed to use the low emissions to make a case for the nation,” Arshad said. He said Prime Minister Nawaz Sharif’s two-minute-speech at the conference had failed to achieve anything on this account. Arshad said other countries including India had presented much better cases by highlighting mitigation efforts along with their vulnerability.

Naqi said consultations on the INDCs were carried out over a year with the Ministry of Climate Change. “A comprehensive document was presented to the PM’s Secretariat and the foreign ministry,” he said. Naqi said the INDCs submitted were barely 350 words. “They actually speak about peaking emissions before working to reduce them,” he said.

Naqi said this was so because the government wanted to explore the potential of coal as an energy resource. “The results will be disastrous if they use coal without converting it into gas,” he said referring to the poor quality of air in Shanghai. “China has been compelled to rethink its strategy,” Naqi said.

He said comparisons with India always invited flak but the country had presented a clear case for itself with regard to its INDCs. “They have set targets with numbers,” Naqi said adding that while India had its own agenda for economic growth it had also been looking at mitigation.

Multan district: PTI and PML-N to battle it out