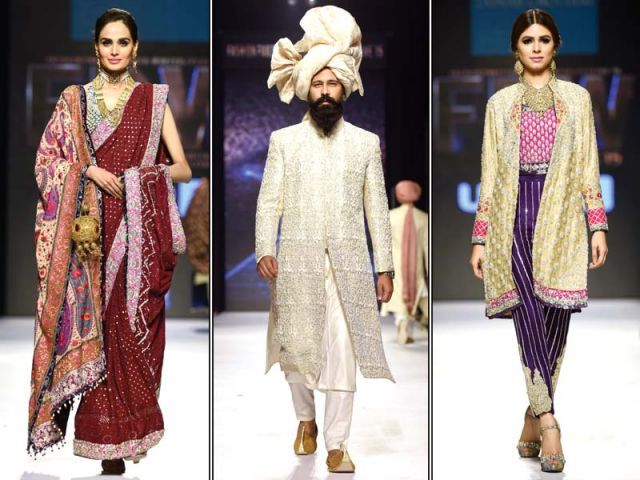 The grand finale of the Fashion Pakistan Week turned out to be the most promising evening of the three-day event. With seven designers showcasing their offerings to the best of their knacks, it is difficult to say which collection outshone the rest.

Umar Sayeed opening the show with the Ho Mann Jahaan cast and Zainab Chottani presenting her Dil Rubba collection won over the hearts of many fashionistas. With every model dressed to the nines, Nilofer Shahid wrapped up the evening with a breath-taking showstopper gown. Essentially, everything day three had to offer proved to be a noteworthy highlight of the fashion week. Fashion heavyweight Umar Sayeed added yet another feather to his cap, showcasing a pristine and cohesive collection that was intricately embellished and innovatively styled with whimsical touch.

Dominant trends: The offerings featured designer’s trademark craftsmanship, embellished with extensive detailing and intricate embroidery coupled with visually overbearing silhouettes and long hemlines. Displaying a regal bride on the ramp, The Elysian encompassed a pastel colour palette with each design radiating originality. Ranging from tea pink to mauve, the showcase entailed crystal, pearl and bead work on flowy fabrics such as chiffon and silk. With the Eastern collection featuring primarily saris and ghararas adorned with gold wire work, Sayeed brought his A Game on the runway.

Our pick:  The mauve coloured sequinned sari elaborated with gold wire work was eye-catching with Rubya Chaudhry modelling the look with utmost charisma. An ode to the bride of today, the showcase drew inspiration from the words of Faiz Ahmed Faiz. The silhouettes, recasting the traditional into modern, gave a lyrical bespoke festive feel. With his Western wear having gained ground in the fashion spectacle, the designer equally wowed us with eastern ensembles.

Dominant trends: Based on a colour scheme of black, blush pink, pastels and rich tones of maroon, the outfits were detailed with intricate hand embroideries in thread, naqshi, gotta, crystal and pearl beading. Boasting a balanced progression from gold to silver embellishments, floral patterns on some of the creations defined the modality of the collection. Luxurious-looking, featuring velvet, organza and silks, the ramp witnessed all the right elements in the collection.

Our Pick: The shiny silver outfit worn by Cybil Chowdhry paired with a contrasting mauve dupatta. With tasteful styling, the traditional skill of crochet is amped up with silks and known for its dedication to the antique craft. Transforming this hand-woven crochet into unique flexible fabrics is what the label takes pride in.

Dominant trends: Showcasing an amalgamation of crochet weaves, with intricate zardozi patterns, the capsule collection was directed towards a bride who is eager to fuse traditional work with a contemporary twist. Experimenting with structures, colours and fabrics to produce unique and surreal creations, the line displayed a diverse offering. Although the designer delved into her signature aesthetics and played it safe with a restricted colour palette and light embroidery, the runway saw sharp hemlines and daring silhouettes, which gave the collection an edge. The line primarily entailed embellished matching separates, featuring crop tops, pants and overcoats along with a few saris. The offerings with sequinned bird motifs on them were a sure-fire stand-out.

Our pick: Fia Khan radiated on the ramp in a parrot-green sari detailed with sequinned bird motifs on the pallu.

Cold start to a festive season Emanating a traditional yet contemporary charm on the ramp was Zainab Chottani’s bridal collection. Showcasing a mix of the old and new styles, Dil Rubba introduced ghararas modernised into pants and a mesmerising showcase of gowns and jackets.

Dominant trends: There is nothing more graceful than wearing traditional silhouettes and nothing more satisfying than being caught with the latest trend; hence, the line featured an eclectic mix of the old and the new. With each outfit created in vibrant hues of pink, purple, turquoise and green, the colour palette breathed life in the offerings. It was for this reason that the collection stood out among others. Sequinned culottes, embellished crop tops, embroidered shawls and graceful saris dominated the line.

Our pick: The maroon sari coupled with an embroidered shawl draped over the shoulder was a stunner on its own.  Mehreen Syed accessorised the graceful look with antique jewellery and a batwa. Fashion couturier Faraz Manan put his best foot forward to create a unique and distinctive bridal collection. Taking a step ahead of his design philosophy, he broke away from his signature fashion forte of interlacing with lace and net fabric.

Dominant trends: The design house certainly knows its strengths and works within the parameters of what it knows best: mixing fine fabrics such as French silks, brocade and organza. Further complimented by traditional trimmings and intricate embroidery, Manan’s line was brimming with sophisticated cuts and flamboyant silhouettes. Belted saris, chatta patti dupattas and cut-out sheer sleeves embellished with pearls and crystals displayed the diversity of his design aesthetics.

PSFW 2016 to evoke marvel in March The designer gave the evening a grand finale with the collection. Drawing inspiration from the Dutch artist, Rembrandt, the designs reflected some of his most celebrated paintings with each piece paying tribute to the artist’s feelings at the time of creation.

Dominant trends: Nilofer outdid the task of painting a vivid imagery of the artist’s creations on the ramp. Experimenting with shades of beige, red, green and black, the line featured gowns, capes and jackets in playful cuts. From landscapes of trees to digital prints of nudity, the outfits were created on opulent fabrics such as velvet and silks with ruffles and layers that were reminiscent of ancient times. Black and gold embroidery dominated the collection.

Our pick: Mehreen Syed stunned on the runway in a ruffled gown inspired by Rembrandt’s famous painting The Jewish Bride. The designer behind a label that spells men’s fashion in Pakistan set his collection in a rich and royal Mughal mood. Aiming to create a legacy through the creations, the theme of the showcase revolved around empowerment, strength, virtue and continuation.

Dominant trends: Arfeen brought a majestically-themed menswear collection to the runway. The palette boasted colours such as ivory, olive and honey dew, and featured plush fabrics such as raw silk, velvet, hand woven jamawaar and Mysore silks.  From sherwanis and jackets, to the dhoti shalwar and elephant motif shawls, the collection featured enchanting imagery by blending the contemporary with the traditional. While digital prints added vibrancy, intricate embroidery introduced textures to mould a striking effect.

Our pick: Wearing a turban and pointed khussas, Abbas Jafri trumped the regal look in an ivory sherwani.

To Paris, with love