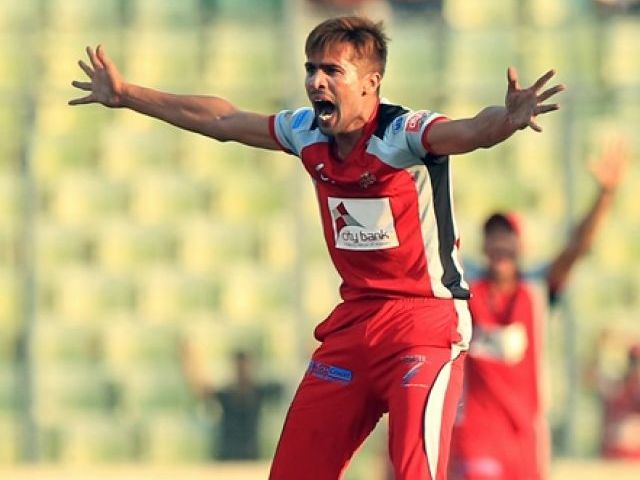 Left-arm fast-bowler Muhammad Amir is on a roll in the on-going Bangladesh Premier League (BPL). In Wednesday’s match for the Chittagong Vikings, Amir managed to take out Pakistan T20 captain Shahid Afridi.

Afridi came on for the Sylhet Superstars when they were four wicket down for a score of 22. The right-hand batsman then mustered 62 runs off 41 balls to guide his team to a decent total of 139 runs. He hit four sixes and five boundaries in the process.

Meanwhile, Amir, who has been bowling the in the start and at the death for Vikings throughout the tournament was called on for the 18th over.

The quickie didn’t pay any heed to the blistering all-rounder and bowled him out on the very first ball of the over. A delivery which went away from Afridi’s bat and dislodged the bails.

Amir ran forward in excitement while Afridi, who was hitting nearly every bowler out of the ground, walked away with just a disappointed Oh!

On his way back, Afridi did use his hand to emulate what Amir had done. Swung the ball away from him.

Amir should not be brought back for national duty, Inzamam tells PCB

With the Pakistan cricket fraternity divided on whether to give Amir a national team recall, the left-armer has created a strong case in his favour with his performance in the BPL – his first tournament outside of Pakistan after serving the five-year spot-fixing ban.