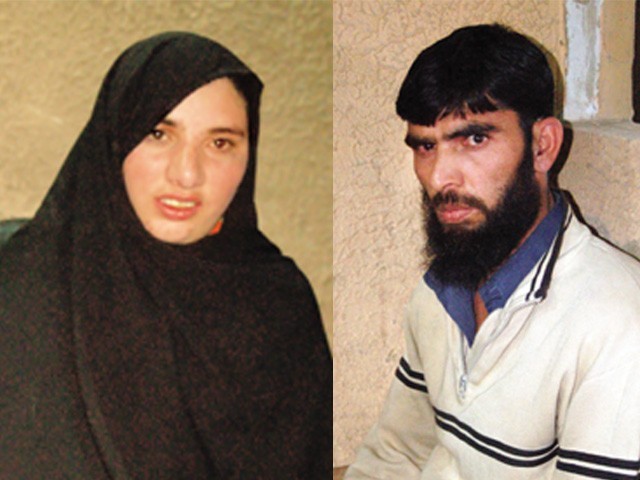 KARACHI: “I don’t want to live with them,” said the frightened young woman at Baloch Colony police station on Thursday.

Blinking in the bright lights of the flashing cameras and ducking from the rapid-fire questions being thrown her way by the media, Sellay looked confused and frightened. She could only talk and understand Pashtu.

The Baloch Colony police found Sellay, with her feet fettered in irons chains, in Qayyumabad near the Express media group office on Thursday. She was allegedly detained, tortured and chained by her husband and in-laws in Liaquat Ashraf Colony within the jurisdiction of the Baloch Colony police station. “I was called around 11 am that there is a girl with chains around her feet, sitting near the Express office,” said Baloch Colony SHO Samad Khan. “I went to the spot, cut off her chains and brought her to the police station.”

Sellay was living with her husband and two brothers-in-law in Ashraf Colony for the past six months.

Khan said that they have arrested her husband and his brothers.

Police have also registered an FIR under sections 342 and 337-A-1 against the accused, who are now in lockup. Sellay was then handed over to the investigation department and then taken to a hospital for legal formalities.

The rosy-faced Sellay, who hails from Allayi in Battagram district, was wearing a black veil and sitting between two female police constables. “I don’t want to live with them,” she said, pointing to her husband and in-laws, who were sitting on the bench in front of her.

“They hit me and for the past month, my sister-in-law has been tying my foot to the charpoy with a chain,” she told The Express Tribune.

Sellay alleged that her in-laws only free her at meal times. “I want to go to my mother,” she said, looking up at her husband. “I don’t want to go with them. They will tie me like a goat and torture me again. Please take me to my mother or my uncle,” she said.

Narrating the story of her escape, she said that she was alone in the house and for a change, her foot was not tied to the bed. She managed to run out of the house and a little further away from there, some men saw the chains around her foot

Selley’s husband, a young man with a black beard who could not speak Urdu very well, said he works in a small hotel in Baloch Colony and hails from the same area as his wife.

“Sellay’s mother does not want her to live with me. She wants her to divorce me so she can marry her off to someone else,” Abid said. He added that his wife had escaped several times and this is not the first time they have found themselves in this tricky situation.

“I never hit her and she is never chained,” Abid rebuffed all the accusations. He said his sister is married to Sellay’s brother, Mazhar Khan. Sellay’s family is not allowing his sister to meet with them. “They have kept her hidden somewhere for the last six months. Yesterday we found out that they are living in Abottabad,” he said.

Abdul Waris, Sellay’s brother-in-law, said they have told her uncle that they will not be responsible for her because she keeps running away. “Tomorrow I was going to take her to Abottabad to her mother,” Waris claimed.

He said that she had run away before the last Eid and for 14 days, she was missing and was kept by a rickshaw driver in Banaras

He also dismissed Selley’s claims of torture and said she is lying. “She put the chain around her foot herself,” he said, adding he would never hit her because she is like a sister to him. “I could not be cruel to a girl so far away from her home and her parents,” he said.

Saleemullah Khan Turk was an arbitrator in the jirga hearing that was called when she had run away from her house the last time and was given asylum by a rickshaw driver in November, 2010.

He confirmed that the woman had run away many times before. He believed ‘small incidents of torture’ are part of marital life.

“Being a Pakhtun wife, she should be able to bear such little torture,” he said before adding that there were no signs of physical violence anyway.

He directed CCPO Karachi to ensure stern action against those involved. Dr Mirza also directed the police officers to provide necessary protection and assistance to the victim.

Provincial adviser to chief minister on information Sharmila Farooqui also came to the police station and assured protection and justice to the victim.

‘Provincial Assembly likely to be adjourned’