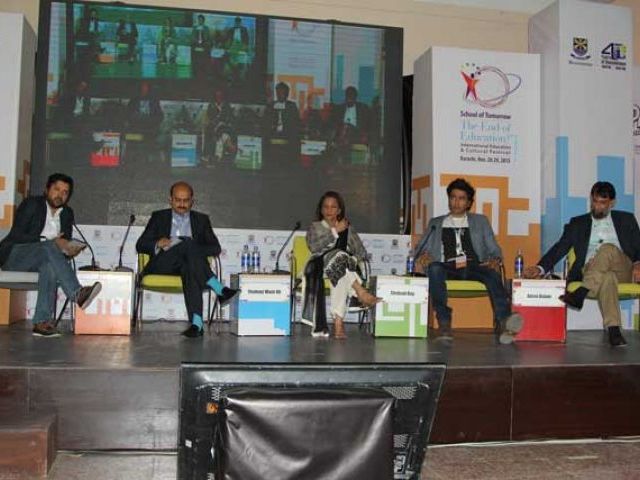 KARACHI: Education is not an ideological problem but more of developmental problem, said the moderator Muaz Ahsan.

He was addressing a session, titled, ‘Government Schools: Unlocking the Potential’ on the second day of the School of Tomorrow conference. The session discussed the policies and measures that can be adopted to make government schools more effective and efficient.

In order to explain the dichotomy between public and private institutions, Aman Foundation CEO Ahmed Jalal shared a recent study conducted in India. The results revealed that public hospital doctors performed better in private hospitals. Privatisation provides incentives to the employees, he pointed out.

The study shows that the performance of people changed as soon as their institutions changed, he pointed out. “However, for us performance does not matter,” he said, referring to how public institutions do not care about ghost employees and other problems. In government institutions, there is no system of checks and balances, he added.

Shaheed Zulfiqar Ali Bhutto Institute of Science and Technology acting president Shahnaz Wazir Ali raised the issue of why such topics are not discussed in public schools and why public school teachers do not get the same training opportunities as their counterparts in private schools.

Debating the issues of high dropout rates in schools and the number of children who do not go to schools, Ali said that the problem of dropout students is more dangerous than the latter. She claimed that out of 100 students enrolled in public schools, only 20 manage to complete their matriculation. However, hardly five manage to make it to university.

Striving for harmony: Education as a tool for peace building

Singer Shehzad Roy was of the view that credible changes cannot be made till the whole sector is reformed. “In 2006, when we took Fatima Jinnah School under Zindagi Trust, we focused on three areas — academics, administrative and policy changes.” In a span of merely nine years, the same school is producing quality education and its students are competing on the same platform as students from private schools, he pointed out.

When questioned about what prevents the replication of the same model into other areas, he said that its the media and the civil society. Whenever somebody takes the initiative to adopt a school, the teachers, who are afraid of losing their jobs, start protesting, he said. The so-called civil society helps them and media portrays the investors as ‘cruel’, he claimed. People will then be afraid to take steps to improve the system, he added.

“In Karachi, the public and private Institutions must work together for the betterment of education,” said Adeel Aslam of Education Fund for Sindh.

The wary ones: One step forward, several steps back