When Urdu was the dominant language in Afghanistan

At no time in Afghanistan’s history did Urdu have more influence in the corridors of power in Kabul than in the 1930s
Arwin Rahi December 13, 2021

In the 1930s, no foreign language was more dominant in Afghanistan than Urdu. At no time in Afghanistan’s history did Urdu have more influence in the corridors of power in Kabul than in the 1930s. After Persian, Urdu was also the most widely spoken language by the officials of the Afghan government. As such, neither Bollywood introduced Afghans to Urdu (a widely held misconception), nor did Afghans initially learn Urdu after immigrating to Pakistan in the 1970s and 1980s. Afghans have a longer history of utilising the Urdu language.

To begin with, Afghan King Mohammad Nadir Khan (1929-1933) was a fluent Urdu speaker. Mohammad had been born in 1883 in Dehradun and had spent the first 18 years of his life in India. Amir Abdur Rahman Khan (1880-1901) had exiled Mohammad’s family from Afghanistan to India, where they lived until after Amir’s death in 1901.

When Indian religious scholar Maulana Syed Sulaiman Nadvi (who later became Pakistani after Partition) visited King Mohammad in Kabul in October 1933, they initially greeted each other and exchanged pleasantries in Persian. Later on, they started conversing in Urdu and continued to do so until the end of their meeting.

Like King Mohammad, his brothers were also fluent in Urdu. His younger brother Sardar Shah Wali Khan, who was born in 1888 in Dehradun and received his education there, spoke Urdu as fluently as King Mohammad himself, and arrived in Pakistan in April 1948 as Afghanistan’s first ambassador to Pakistan. A few months later, he was invited to a gathering by the Aligarh Muslim University’s Old Boys’ Association in Karachi where he addressed the attendees in Urdu.

Similarly, King Nadir Mohammad’s youngest brother, Sardar Shah Mahmud Khan, also spoke Urdu fluently. He was also born in Dehradun in 1890 and was a student of Maulvi Najaf Ali Khan. Maulvi Najaf Ali Khan’s brother, Dr Abdul Ghani Jalalpuri, the principal of Islamia College in Lahore, had served as principal of the Habibia School (Afghanistan’s first modern school) in Kabul, and was a member of the Afghan delegation to Rawalpindi (July-August 1919) to negotiate the terms of the Afghan independence with British authorities. 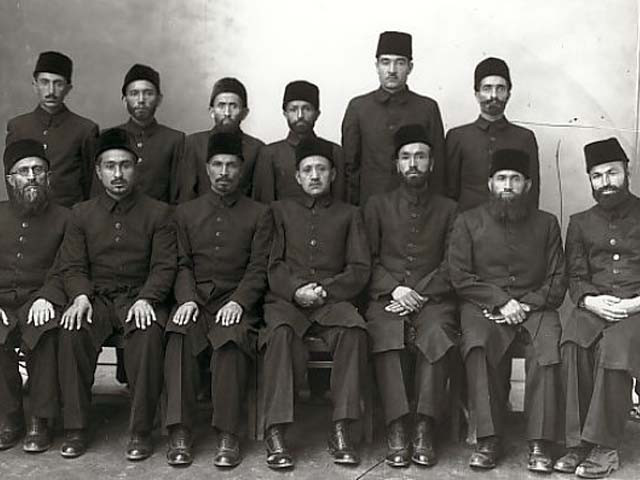 A group picture of Afghan government officials in the 1930s. PHOTO: UNESCO

In those days, King Nadir and his family ran Afghanistan like a family business. Most positions of power were occupied by the king's immediate family members, all of whom had spent time in India and learned Urdu there. The next generation of the Afghan royal family, however, would learn European languages instead of Urdu. The process of learning European languages had begun under King Amanullah Khan in the 1920s, and would reach relative maturity some years later.

In addition to the Afghan royal family’s attachment with and utilisation of Urdu, the Afghan government employed Indian citizens to teach in Afghan schools and to undertake technical assignments such as operating machines in factories. When the Habibia School was founded in 1903 by Amir Habibullah Khan, the majority of its teachers were Indians, who taught in Urdu and Persian.

Urdu was also desirable for the fact that Afghan students who wished to continue further studies in India needed to know Urdu. From a traditional Afghan perspective, travelling to non-Muslim Europe, for educational purposes or otherwise, was frowned upon and unwelcome. India was considered to be the nearest, most economical and culturally appropriate option. King Amanullah, however, in the 1920s, replaced Urdu as a medium of education with Turkish and European languages such as French and German.

In the early 1930s, there were nearly 200 Indian teachers and skilled workers in Kabul. Maqboolul Haq Ghazipuri, who initially taught at the Habibia School and then took up an assignment at the government-run sewing factory, and Sayed Abdullah (originally from Peshawar), who served as vice chief of the Afghan army, were just two out of the many prominent Urdu speakers of Indian origin who were employed by the Afghan government.

In the 1930s, there was a group of Indian Muslim religious scholars who resided in Kabul. Chief amongst them were Maulana Saifur Rahman, former teacher at Delhi’s Fatehpuri Madrassa, and Maulana Mansoor Ansari, former director of the religious studies department at the Aligarh Muslim University. In addition to the Indian scholars, there were also several Afghan graduates from Darul Oloom-e-Deoband and other institutions in India that lived in Kabul. All of these Afghan and Indian gentlemen understood and spoke Urdu fluently.

Furthermore, Afghan businessmen — especially Afghanistan’s Hindus and Sikhs — were another group of Urdu speakers in Kabul since they would regularly travel between India and Afghanistan . At the time, India was Afghanistan’s largest trading partner, and Afghanistan relied on Indian seaports for trade and commerce.

Finally, Afghan government officials and employees, as well as their families, who were posted to India used to come back with fluent Urdu skills. At the time, Afghanistan had trade offices and commercial representations across North India. A large number of Afghan government employees, government-affiliated individuals, and their families lived in India. For instance, the popular Afghan singer Ustad Mohammad Sadeq Fetrat Nashenas spent about seven years in different Indian cities in the 1940s during his childhood. The singer's father worked as a bank-i-milli Afghan (an Afghan public-private bank) representative in India in the 1940s. Sadeq and his mother had gone to India with his father. At Delhi’s Jamia Millia Islamia, Dr Zakir Husain, who would later become India’s first Muslim president, taught the young Sadeq Urdu and Persian. Moreover, in the 1950s, long before Sadeq became a popular singer, Radio Afghanistan’s Urdu programme organiser, Amir Jan Gran, who himself had spent time in India and learned Urdu there, recruited the singer as an Urdu language presenter, and his Urdu skills would also come in handy several years later.

When Pakistan and India reached an agreement in Tashkent in January 1966 to end the 1965 Indo-Pak war, Radio Moscow asked Sadeq, who at the time was pursuing his postgraduate studies in the Soviet Union, to commemorate the occasion with a musical piece. In light of this, Sadeq composed and sang two Urdu songs. His first Urdu song was based on one of Faiz Ahmad Faiz’s poems, for which the opening verses are:

Like the new breeze of spring, that grants blossoms their hues

Come forth love, grant the garden leave to go about its business

His second Urdu song was based on one of Ali Sardar Jafri’s poems, which starts as follows:

Faiz was accompanying President of Pakistan Mohammad Ayub Khan on his trip to the Soviet Union in 1966, while Ali Sardar was accompanying the Indian Prime Minister Lal Bahadur Shastri. Hence, it was remarkable that Radio Moscow would ask an Afghan singer to commemorate the India-Pakistan agreement. Sadeq’s command of both the Urdu language and music was the decisive factor in Radio Moscow’s decision to ask him for the favour.

With the passage of time, due to Afghans’ familiarity with Urdu, many Urdu terms and phrases have either replaced their Persian counterparts or are used in tandem with Persian in Afghanistan. For example, Afghans have abandoned the Persian term khiaban in favour of its Urdu counterpart sarak. For money, Afghans use the Urdu term paisa more than the Persian term pool. Afghans use gadi, derived from the Urdu term gari, for a horse-drawn two-wheeled carts or tangas. Moreover, Afghans across Afghanistan also use the Urdu suffix wala commonly in combination with hundreds of terms. For instance, terms such as akhbarwala, chaiwala, khanawala and motorwala have been in use for decades.

The writer is a former adviser to the Parwan governor in Afghanistan. He can be reached at [email protected].

Who does and does not support the Taliban in Afghanistan?

Why Afghanistan wanted India to be partitioned

The legacy of Sardar Mohammad Ayub Khan – The Victor of Maiwand

Well Investigated with lot of details.

Quite an eye opener

An excellent article and I stand educated on facts hitherto unknown to me. Thank you Mr Rahi.