OPINION Words and truth are poison together

OPINION The meaning of Karbala

The forgotten legacy of Black September, 50 years on

The notion that the UAE and Bahrain are signing normalisation deals with Israel for peace is risible
Raza Naeem September 17, 2020

A more insensitive and ill-informed date and week than September 15th could not have been chosen by Washington and its Arab satraps in Abu Dhabi and Manama to sign the declaration that would agree to recognise Israel. This week not only marked the 38th anniversary of the infamous Sabra and Shatila massacres in the Palestinian refugee camps of Beirut which initiated the Israeli invasion of Lebanon; but also the 50th anniversary of the Black September massacre in Amman, which began on September 17th today, paving the way for the exodus of Yasser Arafat’s Palestine Liberation Organisation (PLO) to Beirut and the gradual attrition of the Palestinian resistance.

The fighting lasted from September 17th until September 27th. It is believed that anywhere from 4000 to 10,000 people were killed in the ten days of the conflict, mostly civilians caught in urban warfare. Even a then-obscure Pakistani Brigadier bearing the uplifting name of Ziaul Haq performed yeoman’s service for King Hussein by blatantly violating the terms of his secondment to the Jordanian army by taking part in the massacre – undoubtedly valuable match practice for what he was to wreak in his native country just seven years later as its worst military dictator. 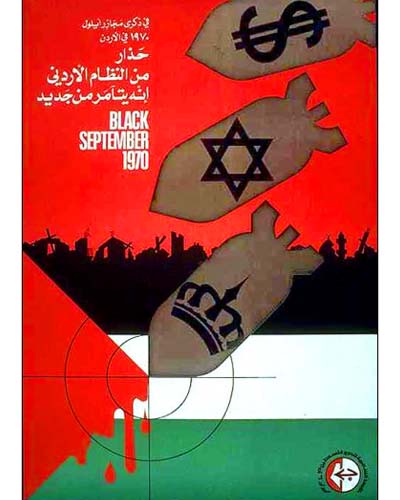 The Pakistani resistance poet Habib Jalib a few years later wrote in his elegy titled Yazeed Se Hain Nabard-Aazma Falasteeni (The Palestinians Confront Yazeed) about the plight of Palestinians in Beirut but he could have been writing the same for the massacre in Amman:

As Jalib had presciently foretold in his poem nearly four decades ago, the notion that the United Arab Emirates and Bahrain are signing normalisation deals with Israel for peace is risible; their purpose is solely their own self-preservation, with Saudi Arabia, Morocco, Oman, Sudan and the two remaining petrol stations of the Gulf, namely Qatar and Kuwait possibly in tow. Just like Nasser’s Egypt in the 1950s, 1960s and 1970s, the aim now is to target and surround revolutionary Iran, if not by outright invasion, then by Israel’s recognition. Turkey, which was the first Muslim country to recognise Israel in 1949, makes noises about Palestine now and then, but it will not break off diplomatic relations with Israel over such a trifle; far better to call for the overthrow of the rulers in neighbouring Damascus.

So Jalib’s elegy for the martyred Palestinians in Beirut is being offered here in my original English translation not only as a way to remember an atrocious massacre which began the downward slide of the world’s memory and sympathy regarding the Palestinian issue, but also for its foresight in predicting the shameless betrayal of one Arab state after another to the Palestinian cause, especially the ‘sheikhs and the shahs’. Palestinian Lives Matter.

‘The Palestinians confront Yazeed in such a manner

Holding in their hands Husain’s banner

Write the tale of Beirut with the blood of martyrs

Till when will the beheading of consciousness by ignorance repeat.

The poisonous wind moves with such intensity

That all but extinguished is the flame of majesty

Do those who praise the world have any information

About the people of Palestine and their condition

Such a commotion in Lebanon occurred

With the blood of martyrs, the earth is coloured.

They are slaves of gold and silver by God

Do not expect from them any hope for compassion

How could the emirs not support Washington

Friend, because of it exists their dominion

They pray for Israel

In that it preserves their kingdoms, they feel

In short, their only interest is their throne and crown

Why should the Palestinian martyrs elicit their frown.

They are all agents of imperialism, my friend

Alongwith the enemy, their heads we must bend.

The hubris of the vulture is upon the horizons

But with their beaks under their wings lie the falcons

With a different style, these too are the enemies

When did we ever have hope from the monarchies

Why should they fight our battle after all

Those whom the golden palaces hold in thrall.’