OPINION Physiotherapy left to whims and designs of therapists

OPINION The US paradigm shift over China

Bees Sau Gyaara (2011) was the first book of renowned author Mohammad Khalid Akhtar, who is celebrating his birth centenary this year. This novel was first published in 1950, 70 years ago this month under the arrangement of Maktaba-e-Jadeed in Lahore. The distinguished Urdu satirist Kanhaiya Lal Kapoor deemed it the first social and political satire in Urdu and had expressed the wish to be the novel’s writer.

The novel is dedicated to Akhtar’s fellow-maverick Fahmida Riaz ‘because apart from being a cheerful poetess and storyteller, she is also a sympathetic friend and we are both companions together. Also, in that fourteen or fifteen years after the publication of this book when she was an adolescent girl, she amazed and pleased the middle-aged writer of this book, his dreams broken by writing in her playful and witty letter that 2011 is her favourite book in the Urdu language and she has read it many times. And this at a time when everyone had forgotten my first book which I had written in my days of youth in a narrow and dark upper storey of Kharadar in Karachi with non-labour and ease (and I think that in a way this had flown out of me.)

So I now give this book to my friend who liked it in that this is her book. By beauty of coincidence I am merely its copywriter, not more than that.’ 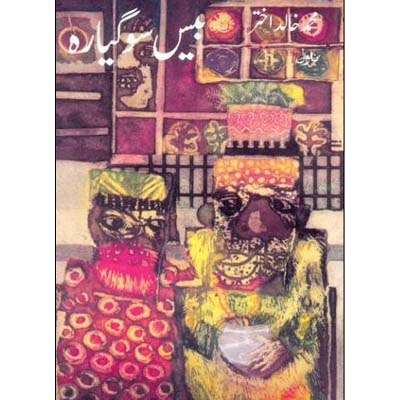 So on International Translation Day today, what better way to celebrate the 70th publication anniversary of this landmark work in its author’s birth centenary year than to translate Akhtar’s witty and sparkling introduction to its first edition, stimulating a new, younger readership for it.

This is my first book which is actually being published. This event (or accident) bears great importance for me and I think that it could be called somewhat blessed (although our new generation views the word ‘blessed’ with suspicion and to them it reeks of a sort of hypocrisy and ridiculous depth. I am not only dedicating this book to you because you are a good friend and a good (in every meaning of the word) publisher and are publishing my book, but also because being an intelligent man, you will understand that I am not just tilting at windmills. Even then I will not advise you to look for a lot of meanings between the lines. I have written it to remove the unbearable pain of a long period of forced unemployment, and if you can only get half the fun from these pages which I have had in writing them, I will be both surprised and happy.

Every writer in fact every person has his own separate world. This book will help you in peeping into my world. You will perhaps find this world an odd, absurd and without head or tail, but despite these deficiencies (I hope) this world is warm and beating with love for humanity. This is a fantasy about the future. Mr Popo, who is the president of the Republic of Yoknapatawha, in the blessed year of 2011, at the invitation of the government of Maznine, goes to that country and this book is in a way his report on the social, civilizational and economic conditions of Maznine. But this report is very different from the general official reports because Mr Popo himself is a man of the people or at least he claims to be such, and is not alienated from sharp observation coupled with a sense of humour. I do not want to see this book being studied as a political satire on fascist governments. This is merely (But I repeat again) a diversionary fantasy which was been written for the purpose of amusing or killing some free time.

Indeed you yourself had advised me once that I should not publish anything of mine without correcting the errors of language. I regret that I am not acting upon your worth-appreciating admonition because a writer wants to remain just himself. This book is definitely filled with pitiful mistakes of language and reading this book will probably be fatal for those people within which a slight change in idiom and the colloquial is a cause for palpitation of the heart. This is not their thing.

Actually brother Rashid! This is not my obstinacy. According to me, for a language to be sticky and lifeless is a greater unforgiveable sin than for it to be erroneous and astonishing. I have used this type of language because according to me it is this very language which can acquit an obligation to the strange atmosphere of my world.

Urdu has for too long been treated as a pure virgin. To move one word from within the colloquial or idiom is to bring on a calamity as it were from here to there and the high priests of language shake up at this blasphemy. I have absolutely no sympathy with this manner, this swift sensitivity, because I do not regard Urdu as so sensitive as to be unable to bear a bit of informality and ill-manneredness.

I cannot believe the thing that language can ever become spoiled. William Faulkner and many other American writers write horrible English which is full of countless errors with respect to grammar and which can be said to be eligible for striking a serious blow to the hearts of many lexicographers of Oxford. Faulkner’s sentences are so tangled and complex and ambiguous that at many times it becomes a puzzle to find the subject, verb and object within them. Despite this, this tangled language has the greatest part, the most important part in expressing his meanings and his strange mutilated world and in creating a special Faulkner atmosphere. Without it, Faulkner cannot remain Faulkner. After becoming used to it, the same language begins to have a special beauty and attraction within it.

The idea of writing this fantasy initially came to me when I read reviews of the recently-published novel ‘1984’ (the year 1984) by renowned English novelist the late George Orwell in English literary weeklies. This novel too is a logical novel about the future. (I have not read it till now and neither have I seen it here in any bookshop.) Orwell’s novel is realistic and has been described by critics as heart-rending and horrible in its impact. My fantasy is a light thing, a long laugh in which the writer if not all the time, is laughing most of the time. I fear that my imagination about the future is not logical.

A few months ago, I had written a briefish satire which was published with the title ‘Sitaron Se Aage Maznine Main’ in ‘Imroz’, Karachi. I think it was really liked. But I was not satisfied, I still wanted to say a lot more and was burning to present this theme on a wider canvas.

My intention was to write in imitation of the fantasies of H.G. Wells but I was not successful in that. I fear that this fantasy of mine has been reduced to a farce – an uncouth and disorderly farce. I will request you that you judge its literary status upon the whetstone of a farce.

And now can I lift the curtain off this disguise by ringing the bell?

With love and sincerity,

Urdu got started with amixture of words from many languages A LASHKARI INTER MINGLE Itgenerously picks up words it wants to express in with ease Sanskiit ,punjabi ,persian ,pashto, English, French , ALL FIT WELL IN URDU HENCE URDU IS A LIVING LANGUAGE