On the bright side of a downpour

Getting home at 10.30 pm was not part of my plan for the day but even traffic jams have their advantages.
Batool Zehra September 08, 2011

“It shouldn’t rain in Karachi,” says my driver defeatedly, after four hours of standing on the Baloch Bridge.

We are riddled with doubts: should we have taken the Gora Qabristan route?

Should we turn onto Shahra-e-Faisal instead of going straight onto Shaheed-e-Millat?

The fact is, whichever way we turn, we were stuck.

I roll down the window of my steaming Mehran – thankfully, I have a book – and read, first in the fading light of dusk and then in the beam of headlights from stationary cars, while the drizzle lightly soaks me. By the time I’m halfway through – my book, I mean, we’ve still not crossed that bridge – the rain has stopped but the traffic jam is just as bad.

At this point, you must be expecting me to curse about the myriad annoyances that form the pet peeves of the Pakistani middle class. One could go on about our abysmal drainage system because of the water collecting on the roads which is now causing vehicles – whether giant Mazdas or tiny Suzukis – to sputter to a halt, causing hold-ups and arguments.

Or one could always have a go at the authorities, for their lack of management and foresight, though they are no less unprepared than the drivers who, knowing it’s the monsoon season, have not prepped their vehicles, and even run out of petrol. Or the traffic policemen who are nowhere to be found. A slightly more thoughtful gripe might be about Mustafa Kamal’s grand plan to construct two thousand flyovers and underpasses which did nothing to ease our traffic problems. Or the land mafia because while we’re at it, we may as well curse the land mafia.

But guess what? I don’t do that.

Instead, I call up my sister, who lives in the US. She has just sent the children to school and we spend a lovely hour catching up.

I have grown philosophical about getting stuck in the rain. Ever since a shoe shopping expedition to Zamzama with a friend eight years ago, I have managed to get stuck on the Baloch Bridge during a monsoon shower every year. So yes, getting home at 10.30 pm was not part of my plan for the day, and it really is a shame that a downpour like that can paralyse Karachi’s traffic. But personally, that was a rather relaxing break from my hectic schedule.

I would never have gotten time to read that book, otherwise. 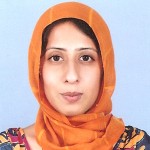 Shanzay Khan | 9 years ago | Reply lol..Big Lol :D
Rashid | 9 years ago | Reply An excellent way of how to get the best out of the worst.
VIEW MORE COMMENTS
B.Y | 9 years ago | Reply Great write up! The title made me wonder as to what really was the bright side of a downpour for other people. For me it's the fact that i just adore this kind of weather. I've never in my life been stuck in traffic THAT long though, thankfully. I like how you made perfect use of all that time instead of cursing the traffic and getting home in a fowl mood. Urban life has its ups and downs. Good you had the smarts to turn a down into an up. Cheers to you!
A | 9 years ago | Reply Good one. Urban life is all about facing the challenges with a positive spirit and moving on with all the hardships.
Dreamermk | 9 years ago | Reply Sweet! A rather refreshing change from the ranting feeds and timelines :)
Bilal | 9 years ago | Reply This is a great country.....
Abu Bakr | 9 years ago | Reply Great writing :)
Noman Ansari | 9 years ago | Reply That was a fun read. I laughed for a second at the end, when you said, "I would never have gotten time to read that book, otherwise." It just reminded me of how sometimes when we lose power (thanks to the lovely organization we have, called the KESC), and I end up doing something I wouldn't be doing otherwise -- like read a book or a graphic novel, or practice my Mongolian throat singing (OK not really), and then electricity returns and a small part of me goes --- awww I wish we still in the middle of a blackout. That's just a really small part though. The rest of me enjoys the fact that air-conditioning is back on, and that I can resume performing fatalities on the PlayStation. Good piece about rain. In no other country do I feel apprehensive about rain, other than Pakistan. That's a shame, because rainy weather is awesome.
Parvez | 9 years ago | Reply An excellent matter-of-fact write up. No frills no deep philosophising, just brilliant.
Replying to X
Saved ! Your comment will be displayed after the approval.
Error !
Error! Invalid Email.