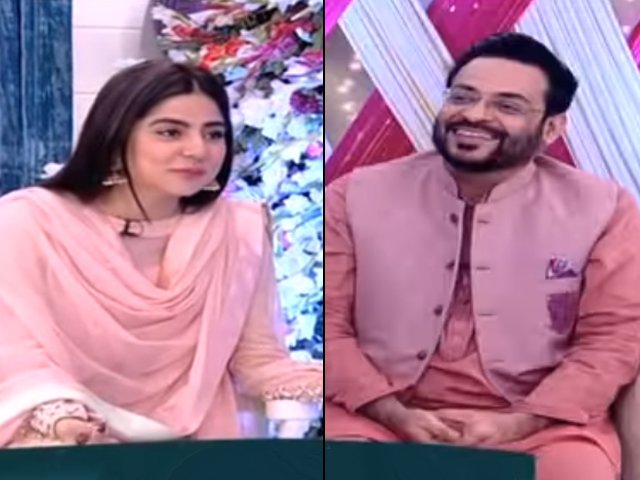 The worst of Aamir Liaquat was seen recently on Sanam Baloch’s morning show, where he was a guest along with his second wife. 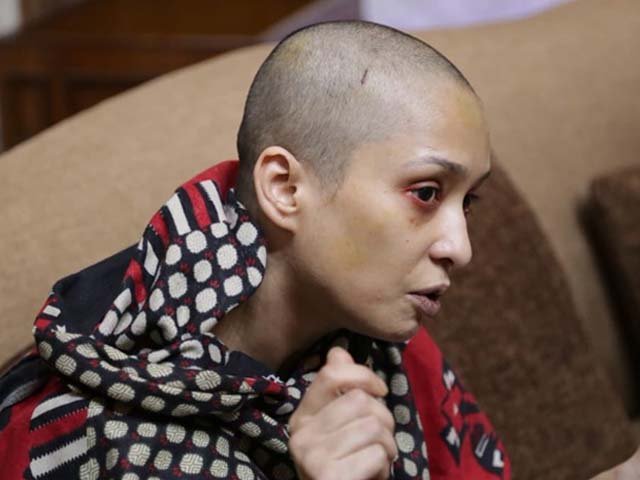 'Perfect victim' or not, Asma Aziz is still a victim of her husband’s brutality and society’s mentality 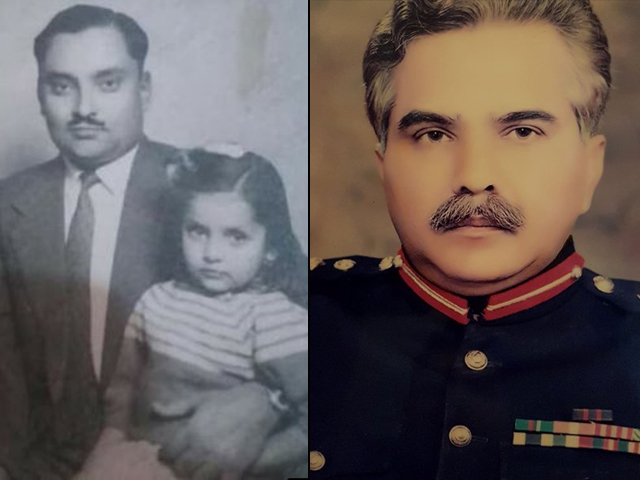 I dedicate this Pakistan Day to my grandfather, a PoW, and my father, a war veteran

To Bushra and Dua Aamir: As a man, I apologise for how our society continues to treat you

While women like Baloch encourage patriarchy, we also have women like Duaa and Bushra who speak out when it's enough.
Sabeer Lodhi December 13, 2018
Aamir Liaquat is neither new to misogyny nor to propagating hatred for minorities by calling for them to be murdered, as well as all other ugly things under the sky. After all, he shot to fame by mostly self-creating the controversies he is known for. From trying to give away babies on live TV and inciting hatred against groups by giving judgment calls against them, to using foul language for his opponents, he has never had any qualms when it comes to getting his hands dirty.

We also witnessed how his filthy mind believes in sexualising fellow female colleagues, when he used an old Indian song to caption a picture of Sherry Rehman and a leader from the Jamiat Ulema-e-Islam-Fazl (JUI-F). He was vehemently called out for his disgusting behaviour, and had to delete that tweet soon after. 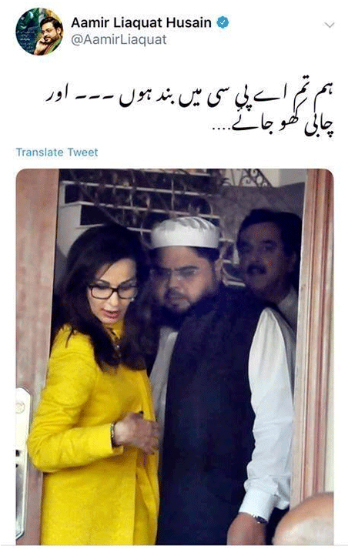 Twitter didn’t delete my tweet, I deleted it myself cause I later realized it might look bad for you. I have respect for you because of the issues you raised in NA when I was there too. It is a misunderstanding, I was targeting MMA Owais Norani, not you.I apologise @sherryrehman

We thought we had seen the worst of this self-professed Islamic scholar then, but we were wrong. The worst of Liaquat to date was seen recently on Sanam Baloch’s morning show, where he was a guest along with his second wife. As if the whole duration of the show – where the new couple was visibly romancing despite knowing the first wife and children might be watching – was not cringe-worthy enough, Liaquat also decided to belittle them and question his first wife’s religious credibility after being asked an extremely inappropriate question by the host. Clearly sexism, toxic masculinity and respect for others, especially Liaquat’s own family, are concepts alien to both him and Baloch.


Setting the stage for Liaquat to wash his dirty laundry in public, Baloch started the show by asking the male audience members whether their wives would allow them to get married a second time. I am still trying to figure out how and why she thought asking a husband what a wife would do was a good idea. She clearly forgot every individual has autonomy and the freedom to make their own decisions, and no husband has a right to speak for his wife.

She then introduces the obnoxious Liaquat to the audience, and then Baloch and Liaquat flirt with each other in front of the current wife. God forbid if any Pakistani wife dares to flirt with another man in front of her husband, but obviously, a man can get away with much worse in this country. Marrying a second time without taking consent from the first wife while your children tweet their agony is definitely worse, amongst other things. There are other abhorrent moments on this show, such as Liaquat playing the victim to justify his second marriage, or rudely interrupting the wife every time she tries to speak, but I will not waste time in listing all of them down.

Another day, another tragedy
Ever since you hurt your family
Sincerest prayers for you to recover
And that too goes for the homewrecker
Hoping Allah guides you to the right way
Whilst your children wipe their tears away.

Baloch ends the show by asking one last question that showcases Liaquat to be as disrespectful and vile as a person can get. She reluctantly asks Liaquat, while also admitting the first wife may not like the question, why his first family did not accept his marriage. Now, the question itself and the way it was asked were both entirely awful, but Liaquat’s inhumane and cruel response outshone everything else cringe-worthy about the show.

He responded that his first wife, Bushra Aamir, may have studied religion but has not understood it, while saying his children have done a lot more that was intended to hurt him, but he ignored it. He went as far as saying that even the internet being used by his children is paid for by him, while he has also given them a house to live in. Baloch shamelessly smiles at this sexist, privileged attitude of her guest while the second wife, Tuba Aamir, slyly smiles. This disaster cannot be explained in words, and perhaps has to be watched to realise how wrong it was on so many levels.

Im so disappointed in Sanam Baloch for talking about Aamir Liaquat’s first wife..call him and his wife on the show..thats fine but she could’ve avoided defaming his first wife when she knows NOTHING about the situation..These morning shows are hitting new lows everyday 🤧

And Sanam Baloch endorsing him and passing judgements about his family. Aamir Liaquat ridiculing them its so disgusting. Cant imagine how painful and humiliating it must be for his family.

To say this morning show was the best manifestation of a patriarchal and cruel society would be an understatement. The show and its participants perpetuated sexism and patriarchy in a society already plagued by this disease. On top of this, they demonised the first wife for not accepting her husband’s abhorrent shenanigans. I am not saying a partner does not have the right to divorce or marry someone they want to, but I do argue that the first partner’s consent as a stakeholder is of paramount importance, especially that of women, who already survive in a patriarchal society that dehumanises them every step of the way.

Our society teaches women to have sabr (patience) and tolerate injustices committed against them. Bushra is doing exactly the same, for she has not uttered a single word despite being an educated, professional woman herself. But I see hope in getting rid of this sexist mindset when the next generation, in the form of daughters, acts strong and speaks out against the injustices done against them and their mothers, the way Duaa Aamir has done. So while we have women like Baloch and Tuba encouraging patriarchy and toxic masculinity, it’s good that we also have women like Duaa and Bushra who are patient and speak out when they have had enough.

Used to like Sanam Baloch but just lost respect for her after watching this clip. Why would you have this vile polygamous creature on your show and then be applauding him so... https://t.co/eQmjf6pYDc

Aamir liaquat is such a disgusting person, degrading your first wife for second is not even in Islam, kudos to Bushra Aamir and her kids for bearing such a terrible person and Sanam Baloch disappointed me with her stance about Aamir liaquat's wife

To Liaquat, Baloch, and the people who share a similar mindset, shame on you!

To Pakistani men who only think of religion to use it to their advantage by advocating for polygamy, this fire won’t take long to reach your own backyard.

To Bushra and the children, you have our love and prayers, and as a man, I apologise that this continues to be the way a segment of our society treats you.

WRITTEN BY:
Sabeer Lodhi The author is studying at Monash University, Melbourne. He is a student and supporter of human rights with a focus on gender equality, minority rights and feminism. He tweets as @sabeerlodhi (https://twitter.com/sabeerlodhi)
The views expressed by the writer and the reader comments do not necassarily reflect the views and policies of the Express Tribune.

Pure ind | 1 year ago | Reply | Recommend As an Indian & Hindu I feel disgusted when religion is used to justify polygamy. This is nothing but an open opportunity for perverts & misogynists to fulfill their filthy desires. India has been trying best to bring in a uniform civil code to stop this filthy behavior in the name of religion. Triple talaqs, polygamy, halalas have no place in Indian society. These guidelines need to be viewed in today's day & age.
Uzma | 1 year ago | Reply | Recommend Sanam Baloch should apologize publicly to Bushra and her kids and also to her fans whom she disappointed. Seriously I feel sorry for sanam's handicapped thinking. I think she should Educate herself morally and ethically.
VIEW MORE COMMENTS
Waqas | 1 year ago | Reply | Recommend I think instead of banning Indian content on T.V, these morning shows should be banned.
Andrew Davis | 1 year ago | Reply | Recommend I have a lot to say about this particular episode but it think that it suffices to say that the scribe of this blog is correct. There has to be some sort of limits and limitation to what all is allowed on TV. Disgusted(and that is the smallest and most polite word I can use on a public forum) for the show and the person who was called on the show.
ABKhan | 1 year ago | Reply | Recommend Why its a responsibility of every men to apologize for the acts of one man? Why every women is not apologizing for Sanam Baloch?
Parvez | 1 year ago | Reply | Recommend Aamir Liaquat + TV + a very average morning show host = utter stupidity. Lets hope the TV station ratings did not go up on that particular episode because then it would be even more disgusting.
Nabeel Nisar | 1 year ago | Reply | Recommend Second marriage does not need any consent from the first wife, according to Shariah.
Patwari | 1 year ago Do you even know why 4 wives are allowed in Islam? It's was and is, an archaic rule. Feasible and applicable in the 7th. century, ONLY. After and during the wars of conquest and spreading Islam, many soldiers were killed. Leaving behind many widows, many marriageable daughters, starving and destitute. With not enough men to go around, to marry them. So, it worked well, to allow men to marry 4 women. Also to produce the next generation of warriors/soldiers. This strategy was practiced all over the world, at that time, in history. By ALL religions. It is as simple as that. This practice was discarded as cultures progressed and the world advanced. And there were less wars. Even the village idiot knows this. No need to use fancy religious words to describe an archaic need of history. Not feasible now. Does not work at all in this day and age.
Waqas | 1 year ago Yes you are right no need to take consent, but there is a thing which we called ETHICS, and in Shariah ETHICS is considered to be the most important thing.
Replying to X
Saved ! Your comment will be displayed after the approval.
Error !
Error! Invalid Email.