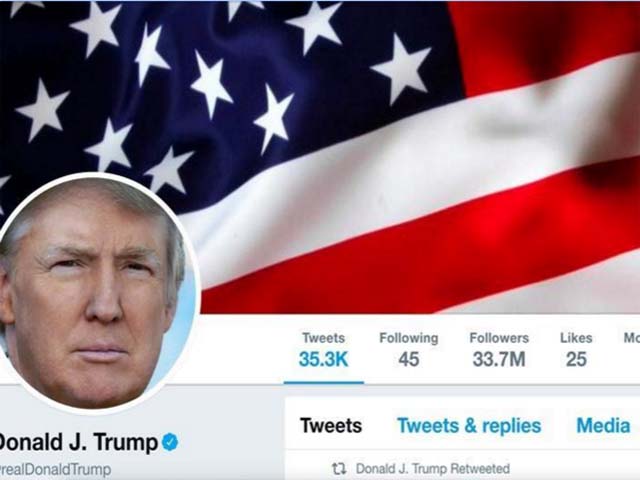 Twitter is to Donald Trump what fidget spinners are to millennials

Twitter is Trump’s tool to deflect from real issues plaguing his presidency, and unfortunately, it works every time.
Iqra Khan September 30, 2017
The priorities of a leader, particularly in times of crisis, tend to speak volumes about their leadership skills. In today’s political climate, where social media dictates public image, leaders like Justin Trudeau are appreciated for eating biryani with Muslim communities, while leaders like Vladimir Putin, who is regularly pictured hunting or exercising, are derided for trying to sell an image of machismo.

In the past several weeks, the US has been severely impacted by two Category 5 hurricanes, with experts believing the devastation to have set Puerto Rico back nearly 20 to 30 years. At the same time, the US was also involved in a verbal war with North Korea; a spat which has already resulted in a travel ban and is on the cusp of escalating into nuclear war. In the midst of what is undoubtedly an amalgamation of crises on all fronts, what are President Donald Trump’s priorities? Why, tweeting about the National Football League (NFL), of course.

If a player wants the privilege of making millions of dollars in the NFL,or other leagues, he or she should not be allowed to disrespect....

...our Great American Flag (or Country) and should stand for the National Anthem. If not, YOU'RE FIRED. Find something else to do!

The issue of kneeling during the national anthem dates back to 2016 when Colin Kaepernick, an American football quarterback, protested the oppression of people of colour in the US by not standing up during the national anthem. His actions are undeniably a result of racial tension in the US, where discrimination is still prevalent, racism remains institutionalised, and unarmed African-American men are regularly shot dead by the police with little to no consequences. In a free country like America, where it is not illegal to burn the national flag, a football player kneeling during the anthem should simply make a statement, which at the time, it did.

However, it became an international issue a year later when Trump, in the midst of on-going international tension and devastation amidst millions of American citizens, decided to champion the cause of the anthem instead.

Sports fans should never condone players that do not stand proud for their National Anthem or their Country. NFL should change policy!

The issue of kneeling has nothing to do with race. It is about respect for our Country, Flag and National Anthem. NFL must respect this!

If NFL fans refuse to go to games until players stop disrespecting our Flag & Country, you will see change take place fast. Fire or suspend!

Great solidarity for our National Anthem and for our Country. Standing with locked arms is good, kneeling is not acceptable. Bad ratings!

What are Trump’s tweets regarding the NFL really about?

Are they about race? No, as he has already clarified, not for him.

Are they about respecting the anthem and veterans, as he claims they are? Given that Trump was openly disrespectful towards Khizr Khan, the father of a slain Muslim soldier, it seems rather far-fetched that he would choose now to care about decorum and respect.

Are they then about timing, and distracting the people from real issues, as he is known to do? Well yes, it would appear so.

At the United Nations General Assembly (UNGA), Trump and North Korea exchanged harsh words, only exacerbated by the tweet that followed, which, according to North Korea, was equivalent to declaring war. We now live in a world where not only is Trump the president of the most powerful state in the world, but his tweets could also be responsible for a rogue state like North Korea to declare nuclear war.

Just heard Foreign Minister of North Korea speak at U.N. If he echoes thoughts of Little Rocket Man, they won't be around much longer!

Meanwhile, the devastation after Hurricane Maria has brought Puerto Rico to a standstill and is indisputably a humanitarian crisis with no end in sight. In the meantime, the Republicans are staying true to their tradition of trying to repeal and replace Obamacare, but as always, they remain unsuccessful. Moreover, the future of the wall-that-was-promised remains uncertain, especially since no one is sure who will pay for it.

Texas & Florida are doing great but Puerto Rico, which was already suffering from broken infrastructure & massive debt, is in deep trouble..

It would not be out of the blue, in this mess, to suggest that things were not looking good for Trump. Until he took to Twitter, as always.

With several tweets, Trump had spun the conversation and taken over the national discourse. Unsurprisingly, everyone was talking about him. Most people, including athletes like Kobe Bryant, supported the right of players to protest racism while also questioning how Trump became president for the thousandth time.

On the other hand, Trump supporters and ultra-nationalist Americans argued that the issue with this protest was all about disrespecting the anthem, some even going to the extent of arguing that African-Americans were being ungrateful. The only common factor between both these groups is that both focused on only this, allowing everything else to be pushed into the background. Even as people questioned why Trump was not concentrating on the disasters, people were talking more about him and his tweets than the issues and crises at hand.

Stevie Wonder takes a knee for the Anthem during a concert.

What is Trump best at? For the sake of our collective sanity, let us not attempt to answer this question in detail. A simple observation is that his support and appeal are always highest when he is unapologetically himself – calling people names, expressing his opinion on Twitter (who can forget his angry rant about Kristen Stewart and Robert Pattinson’s relationship?), and convincing people who already believe they live in the greatest country in the world that he will make it great again. This is what draws the public to Trump, the political ‘outsider’ and alleged billionaire whose draw lies in being politically incorrect.

The NFL has all sorts of rules and regulations. The only way out for them is to set a rule that you can't kneel during our National Anthem!

Most democratic leaders at least try to work for people and get their approval. But Trump? His attraction lies in the fact that he does not try at all – something perhaps only the American public could justify as a good thing. Take a minute and try to imagine former President Barack Obama or Hillary Clinton getting away with even one, just one, of the many issues Trump has gotten away with since he became president.

The W.H. is functioning perfectly, focused on HealthCare, Tax Cuts/Reform & many other things. I have very little time for watching T.V.

Even admitting to groping women did not stop him from becoming the president of the US (POTUS). This says a lot more about the American people than it does of Trump himself, especially when it comes to denying the existence of racism and sexism in the country. The very same groups of supporters do not find it hypocritical that “lock her up,” the slogan Trump made famous when Clinton used a private email server, now applies to his own daughter and son-in-law, both of whom were recently found doing the same. The irony does not seem to end in this administration.

Twitter is Trump’s tool to steer conversation and deflect from the real issues plaguing his presidency, and unfortunately, it works every time. People criticised Twitter for not taking down his tweet that could potentially trigger war, but after some deliberation, Twitter announced that since it met its criteria of ‘news worthiness’, the tweet will not be taken down. Nonetheless, Trump will continue to use Twitter if he wants to salvage what is left of his presidency. Nevertheless, if Americans want to salvage their democracy, perhaps it is time to get the president off Twitter.

Today’s NFL could, literally, be anything else tomorrow – with Trump you never know. Sometimes, it distracts from serious issues, sometimes it leads to serious issues, but there is no doubt that Trump’s tweets bring serious consequences for everyone but him.