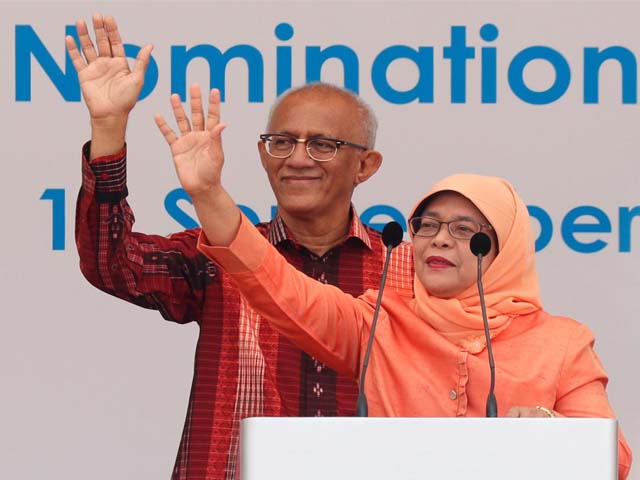 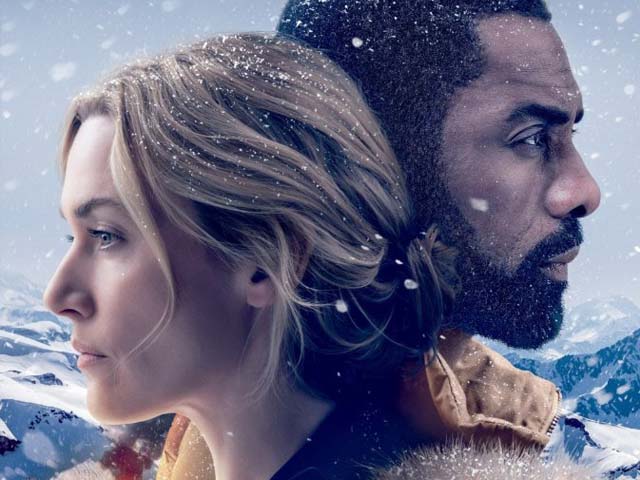 Kate Winslet survived in Titanic but will she be able to make it out alive in The Moutain Between Us? And so it is

Is Singapore turning into Pakistan with its uncontested and undemocratic election of Halima Yacob?

Similar to Pakistan, and how it "elected" its new president, Singapore’s democratic reputation is hanging by a thread.
Rida Khan September 15, 2017
Halima Yacob, a former advocate of women rights, of psychological health and senior citizens, and the speaker of the Parliament of Singapore, was recently sworn in as the first female president of Singapore.


Her election may be a milestone for Singaporean women, but nothing more.

The Singaporean government curtailed the presidency criteria, which authorised Yacob as the most befitting candidate for presidency. Her selection met with social media outrage that is justified due to the fact that it was a uncontested election.

come on. only Halimah received the eligibility certificate. did you guys have to make it THAT obvious? #NOTMYPRESIDENT

The only reason Halimah is the president is coz the gov is afraid to have Tan Cheng Bock as president. #halimahyacob #notmypresident

What an honorable way to win the race #HalimahYacob #NotMyPresident #PE2017 pic.twitter.com/YvgkVgHGDp

#halimahyacob #notmypresident elected without a election.it's sad to see Singapore like this. What happened to meritocracy?

While many argue that her election symbolises diversity (the last Malay to have held the presidential post was back in 1965), most Singaporeans are still enraged over the manner in which she was elected. And rightfully so.

Given that Yacob was elected without a vote and Singapore is a democratic country, several voter rights and ethics come into consideration. Democracy is of, for and by the people and it is supposed to represent the civilians’ interests. Due to this uncontested election, Singaporeans may start questioning the legitimacy of the nation’s political ideology.

A democratic government is supposed to act on behalf of its civilians. They should have the freedom to elect a ruler who will be the most suitable in giving them a platform to voice their concerns.

Had Singaporeans been given the opportunity to go to the polls, they might have made informed decisions and selected a ruler on the basis of meritocracy and not just someone who would perpetuate political purposes. People in a democratic state have the freedom to select their ruler, but in Singapore, their voices went unheard this time around.

Democracy thrives on votes, thus electing a ruler without adequate representation indicates a gap in the nation’s political discourse. This could have implications for the future of Singapore and its foreign policy. Since the strength of the political framework of a country is determined by the choices of its people, this selection may devalue the legitimacy of future political candidates.

In a multi-ethnic society such as Singapore’s (Chinese, Malays, Indians and Eurasians), the first 100 days after the election will prove to be crucial. During this period, it will become evident if the diverse population is ready to accept their new president or not. It remains to be seen whether this would further unite or divide the diverse ethnic fragments.

The Malay population in Singapore often faces discrimination, lack of opportunities and have low-income rates. Yacob herself comes from a poverty-stricken background and has struggled immensely. She has also been an active member of clubs that supported the helpless and vulnerable and has promised her commitment and dedication to Singaporeans.

Only time will tell whether her selection would open more doors for the downtrodden Malays or not. If it does, the 13.4% Malay population will definitely support Yacob and she could very well gain popularity through Singapore’s minorities.

Singapore’s current situation is similar to Pakistani politics where the idea of democratic governments and transitioning is nearly non-existent. There is ample evidence that illustrates that several political leaders throughout Pakistan’s 70 years of existence were not selected on the basis of merit.

Even though Singapore has witnessed its first uncontested election, unfortunately, Pakistan has been through numerous similar situations.

The Panama Papers case best represents our current political scenario. Moreover, the continuous dishonesty shown by political parties in order to win elections has weakened Pakistan’s road to a stable democracy. When the power of choice is given to the people, it can either make or break a nation and this is evident in Pakistan. Due to instability in political institutions, democracy is repeatedly devalued and power goes into the wrong hands.

Nevertheless, Pakistan’s political state of affairs is different when compared to Singapore’s politics. This is because corruption crept into Pakistani governmental and private institutions a while back, whereas in Singapore, corruption is not as rampant. This can be statistically proven as well. In a recent report, Singapore ranked seventh on the least corrupt country index 2016.

Being a developing nation in comparison to a developed country such as Singapore, Pakistan still has a long way to go in achieving progress and the status of an advanced nation. However, taking Singapore’s current situation into consideration and the way it has “elected” its new president, Singapore’s developed democratic reputation seems to be hanging by a thread. 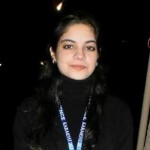 WRITTEN BY:
Rida Khan The author has Master of Science in Social Sciences and Psychology research. She is a bibliophile and is interested in writing, research, learning new languages and traveling. She is also an aspiring polymath, particularly in subjects: positive, developmental and cognitive psychology, political economy, international relations and world history. She tweets @RidaK92 (https://twitter.com/RidaK92)
The views expressed by the writer and the reader comments do not necassarily reflect the views and policies of the Express Tribune.

Patwari | 2 years ago | Reply | Recommend Singapore is not a democracy. It is an autocracy. Lee Kuan Yew was more or less the 'strongman', though not quite a dictator. Because elections are held. He was PM for 25 years! Ethnic Chinese population of Singapore is almost 80%. So they rule. Lew Kuan's son now rules Singapore. Since 2004. Talk about dynastic rule.
Umer Rasheed | 2 years ago | Reply | Recommend What nonsense! There is no parallel between Singapore and Pakistan. What a waste of space!
VIEW MORE COMMENTS
Fame Jay | 2 years ago | Reply | Recommend but i question if she was not a muslim would they all still complain regardless........
Parvez | 2 years ago | Reply | Recommend I hope I have this correct.....one woman gets elected President of a country and another woman finds this distasteful and throws a hissy fit.
ab | 2 years ago | Reply | Recommend The process in Pakistan is that voters even caste vote for a plate of biryani. I think it is enough of the process process game. if the process failed the state it is not of any value. We should change the process. If this lady genuinely and honestly work for her country then enough of the process.
Hassan Mirza | 2 years ago | Reply | Recommend Pakistan Resident have mind set of taking credit of other nation as well as bad or good link to other NATION . in above mentioned scenario Singapore election of Halima Yacob . Singapore is not world 13th most corrupt nation of the world and Singaporean is Loyal to there country where they every year there tax collection is going up for 2016 & 2017 it raise to 5% to net $47 billion in Pakistan an Prime minister just ousted from his office on corruption . Singapore is global financial center .
Rahul | 2 years ago | Reply | Recommend Lee Kuan Yew's Singapore has many similarities with Zia's Pakistan including caning for minor crimes. Lee Kuan Yew made Singapore rich so they have accepted their lack of freedom while Zia impoverished Pakistan so though he made Pakistanis better muslims, they all curse him.
One Guest | 2 years ago please do not give an example of Zia ul Haq, give an example of Indira Gaandi who imposed "the Emergency" as an elected civilian head of the state for a period of 21-month from 1975 to 1977 when Prime Minister Indira Gaandi had a state of emergency declared across the country. Officially issued by President under Article 352(1) of the Constitution because of the prevailing "internal disturbance", the Emergency was in effect from 25 June 1975 until its withdrawal on 21 March 1977. The order bestowed upon the Prime Minister the authority to rule by decree, allowing elections to be suspended and civil liberties to be curbed. For much of the Emergency, most of Gandhi's political opponents were imprisoned and the press was censored. Several other human rights violations were reported from the time, including a forced mass-sterilization campaign spearheaded by Sanjay Gandhi, the Prime Minister's son. The Emergency is one of the most controversial periods of independent India's history. Indira Gaandi also massacred 26000 Sikhs during the operation Blue Star . your currant crime minister Modi has also massacred 6000 Muslims in Gujarat, and millions in Kashmir. One thing I do not under stand that why you always write negative comments for Pakistan, first you should put your house in order than criticize others.
ab | 2 years ago FYI ,In Pakistan those people curse Zia who have nothing better to do.
PorkSmasher | 2 years ago | Reply | Recommend R.I.P Singapore.
shakir ansari | 2 years ago | Reply | Recommend The writer should know Presidential election in Singapore where parliamentary form of governance exist,is held per constitution. Presidency is a ceremonial post. This type of election in Singapore are held to give some opportunity to their minority. Halima Yaqub was unopposed candidate. Where a single person contest, no election is held. We cannot compare it with Pakistani saga.
Replying to X
Saved ! Your comment will be displayed after the approval.
Error !
Error! Invalid Email.