Ali al-Nimr is among more than 50 people at increa­sed risk of soon being put to death in a single day
By AFP
Published: November 27, 2015
Tweet Email 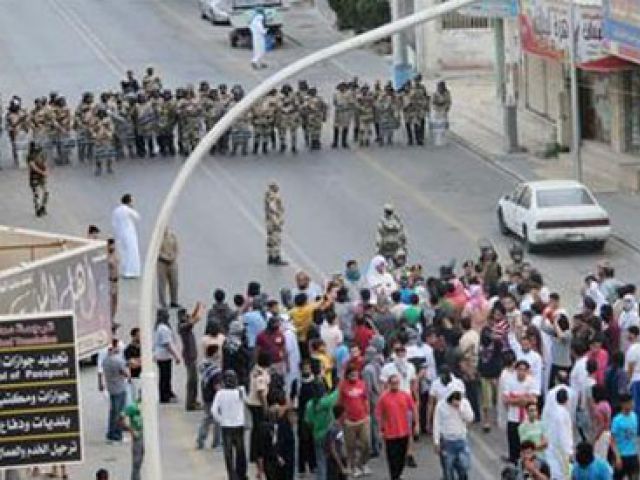 DUBAI: About 1,000 members of Saudi Arabia’s Shia minority gathered at a mosque Friday to demand the release of activists on death row, including one aged 17 when he was arrested, a resident said.

He said the prayers and sermons at Imam Hussein Mosque in the Eastern Province town of Awamiya drew Shias from nearby Qatif and the Al-Ahsa region.

“They gathered to demand their freedom,” said the resident who asked for anonymity.

Their call came as the family of one Shia activist, sentenced to death after protesting, voiced concern over his fate and a rights group warned of his imminent execution.

The sentence against Ali al-Nimr, only 17 when he was arrested in February 2012, has drawn international condemnation over his young age and allegations he was tortured.

Ali al-Nimr’s uncle told AFP on Friday his family fears “the government is serious, very serious” about carrying out the sentence.

Jaffar al-Nimr said his nephew reported that he had undergone a medical check when his family last spoke to him two weeks ago.

Saudi Arabia set to behead 50 terrorism convicts in one go

Amnesty International warned Thursday that Ali al-Nimr was among more than 50 people, including other Shia activists, at increased risk of soon being put to death in a single day.

His mother and the mothers of other detainees implored King Salman for clemency after learning of preparations possibly associated with impending executions, the London-based rights group said.

Ali al-Nimr’s case has provoked a call for clemency from France, while the United States expressed “deep concern”.

Activists say Ali al-Nimr is one of three Shia protesters who were minors at the time of their arrest and have been sentenced to death. They have exhausted all appeals.

“International law prohibits the use of the death penalty against anyone under the age of 18,” Amnesty said.

It added that there were “credible allegations” the three youths had been tortured.

Their fate rests with Salman who, activists say, must give final approval before death sentences are carried out.

“They are peaceful people,” Jaffar al-Nimr said. “They are not criminals.”

The cleric — based at Imam Hussein Mosque in Awamiya — was a driving force behind the protests that erupted in 2011 in eastern Saudi Arabia, where most of the country’s Shias live.

The protests developed into a call for equality in the Sunni-ruled kingdom, where many Shias have complained of marginalisation.

Amnesty said Nimr al-Nimr was among six Shia activists at imminent risk of execution and who were “clearly convicted in unfair trials”.

The rights group earlier this month reported that a surge in executions in Saudi Arabia had pushed to 151 the number put to death this year.

In recent weeks, however, there has been a marked drop in executions, all of which are reported by the official Saudi Press Agency.

Saudi Foreign Minister Adel al-Jubeir on Thursday was asked about the case of Saudi blogger Raef Badawi, sentenced to flogging and 10 years in jail for insulting Islam.

“We expect other countries to respect our legal system,” he said.

Awamiya, near Dammam on the Gulf coast, has been the scene of repeated security incidents since the protests began.

In October, gunfire was heard when police sealed off the town, where officers said they recovered a large amount of ammunition when they raided a farm area.

In April, the interior ministry said a policeman died in a gunfight with “terrorists” in Awamiya.

But the Shias who filled the Imam Hussein Mosque on Friday rejected violence.

“They refused any clashes between the community and the government,” the resident said.

16,000 children in South Sudan forced into conflict this year: UN