A vigil to remember Taseer

A vigil to remember Taseer 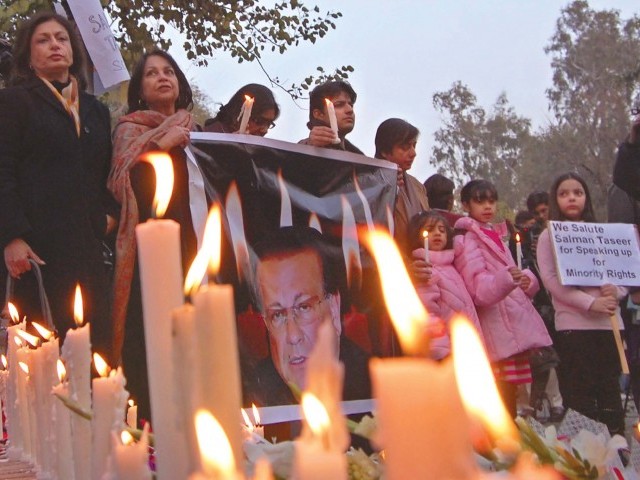 The event was organised under Insani Haqooq Itthad, which is a network of civil society organisations of the twin cities. Human rights’ activist Farzana Bari, former federal minister Javed Jabbar, PPP workers and people from different walks of life attended the vigil.

The participants strongly condemned the assassination of former governor and demanded the culprits to be “punished”. They also chanted slogans against extremism. Later, they showered rose petals at the spot.

Speaking at the occasion, Farzana Bari strongly condemned Taseer’s assassination and urged the government to continue his mission.

While criticising the government, she said that some extremist factors in PPP, “like Federal Minister for Law and Justice Babar Awan”, were the core reason behind such a tragic incident.

He added, “We should not compromise a principle on the behest of some handful people.”

Late Governor Salmaan Taseer was assassinated by one of his own guards Malik Mumtaz Hussain Qadri in Kohsar Market on Tuesday when he was returning to his car after having lunch. He was an outspoken critic of the blasphemy laws.

The governor received 40 bullets and died on the spot, according to doctors.

The government of Punjab announced a three-day mourning period and a public holiday on Wednesday after the incident.