Women’s wings of political parties gear up ahead of polls

Women’s wings of political parties gear up ahead of polls 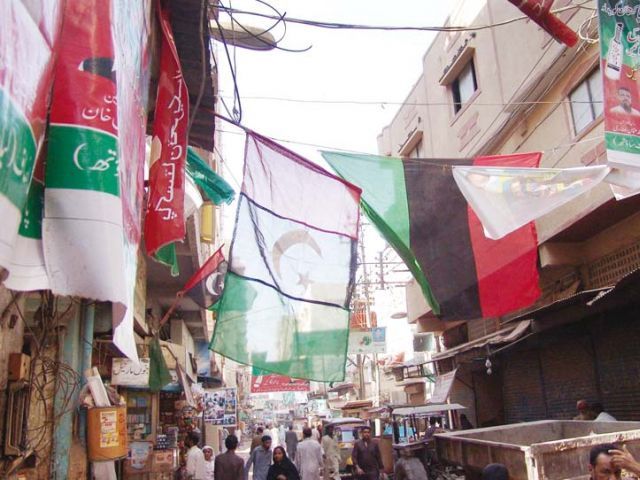 Flags of different political parties being displayed on the roads in Lyari ahead of local bodies’ polls, which are scheduled for December 5 in the city. PHOTO: PPI

KARACHI: As the local government elections in the city draw near, the women’s wing of different political parties of Karachi have geared up their campaigns.

Heads of women’s wing of political parties told The Express Tribune that they are busy in door-to-door campaigns and in arranging corner meetings to spread their respective party’s word.

PTI Karachi women wing president Syma Nadeem told The Express Tribune that the party is running a strong election campaign to attract voters. “We have visited areas such as Lyari and North Nazimabad,” she said, adding that the response of the women from these areas was really good. According to Nadeem, 60 female candidates are contesting in the third phase of the local government elections on the party’s ticket. “They are contesting on all seats including the chairman, vice-chairman and councillors.”

Nadeem also claimed that her party has started training sessions for polling agents at the party’s Karachi headquarters, Insaf House. Speaking about their unique campaign to attract women voters of the city, Nadeem said that she is focused on training female voters. “We are determined to train the female voters about how to vote properly so that their vote is not lost in electing the local government of the city,” she said.

Similarly, Mehr Afsha, the information secretary of Jamaat-e-Islami’s Karachi women’s wing, said they are also conducting door-to-door campaigns. “Everyone is aware of the working and setup of the women’s wing of JI,” said Afsha. She added that her party runs campaigns for the women of the city throughout the year by providing religious classes and lectures on the Quran. However, she added, as the elections are nearing, the party’s women’s wing is solely focused on running political campaigns and spreading the ideology of the party. “We are conducting women conventions in different parts of the city,” she said. “In these conventions, we are educating women about the role they can play in the local government.” According to a party official, two female candidates are contesting the local bodies’ polls on JI’s ticket.

The Pakistan Peoples Party’s women’s wing representative said they will soon start their campaign. PPP’s lawmaker in the Sindh assembly, Shamim Mumtaz, said the party is planning to hold women’s gatherings in all districts of the city. “It has been part of the party’s ideology to support women’s causes,” she said. According to Mumtaz, the party’s women’s wing has been holding rallies and corner meetings for the last two months. Giving details about the number of women contesting on her party’s ticket, Mumtaz said the party has issued tickets to four female candidates. “Unlike MQM or PTI, we do not need to attract women voters by running any specific campaign,” said Mumtaz. She added that her party is already running the Benazir Income Support Programme and other schemes for the women empowerment.

Muttahida Qaumi Movement’s Kishwar Zehra said the party already has a huge female following and a large number of women will contest on the party’s ticket in the upcoming local government elections. “Without a local government, it is the woman of the house who suffers the most because she has to spend the day without electricity or over-flowing gutters near the home,” said Zehra. She claimed that the party has decided to bring in a setup of more women in the local government as the women of Karachi are well aware of the issues they face and how to resolve them. Speaking about specific campaigns to attract female voters, Zehra said the party has arranged a ‘Basant Mela’ in different parts of the city so that women can enjoy the party’s election campaign.

70% of fish in Pakistan destroyed in post-harvest period