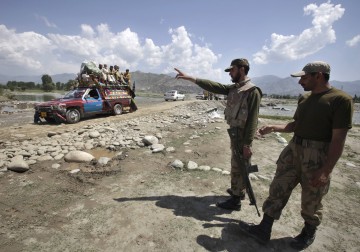 Pakistan army is contemplating an offensive into North Waziristan according the New York Times.

NEW YORK: Having steered clear of North Waziristan for years, Pakistan army is contemplating an offensive into the restive area fearing that it may have become a “witches brew of jihadi groups”.
The idea is being kicked around as Pakistani officials are now recognising that the area has become converging point for diverse groups like Punjabi Taliban, Al-Qaeda militants and Haqqani supporters, New York Times reported.
The plans for an offensive into North Waziristan comes as Pentagon informed the US Congress that Pakistan has pulled out more than 100,000 troops from the Indian border to spearhead a crackdown on Taliban and al Qaeda terrorists in the semi-autonomous tribal belt bordering Afghanistan.
Pakistan army is claiming that it has pushed in 140,000 troops and paramilitary forces to combat Pakistani Taliban. But Times said the army had deployed 10,000 troops and large elements of paramilitary Frontier Corps into it ongoing offensive into the South Waziristan area.
Washington has been pressing hard on Islamabad to undertake a major clearing our operation in the region as US officials suspect that the Haqqani network and the al Qaeda are using the region as a staging area to mount attacks on American led forces in Afghanistan.
“The evolving nature of the militants has made them more dangerous-and made the necessity of going after them in North Waziristan increasingly unavoidable,” the paper quoted Pakistani officials as saying. There is a growing consensus that North Waziristan is now the source of the problem, there is a continuing debate in the military over when and how to tackle it, Times said.
While pursuing militants that carried out attacks in Pakistan, its military did not go after those groups that were operating in Afghanistan, according to the Times. But this policy is now changing.
“Pakistan has nurtured militant groups in the area for years in order to exert influence beyond its borders,” said NYT. “The developing shift in thinking – described in recent interviews with Western diplomats and Pakistani security officials – represents a significant change for Pakistan’s military,” it added.