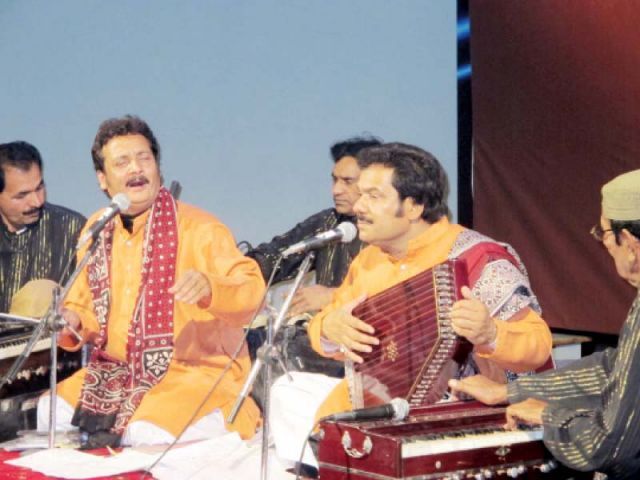 The event also featured the launch their album ‘Sufism beyond borders — A soulful journey’. PHOTO: EXPRESS

ISLAMABAD: In a night of classical music devoted to Sufi poetry and thought, musicians attempted to bring to fore the message of love of humanity across borders to counter the scourge of religious extremism, here on Friday night.

A live performance of Sufi music in various languages was held at Lok Virsa by popular classical musicians Mazhar Hussain and Zulfiqar Ali. The event also featured the launch their album “Sufism beyond borders – A soulful journey”.

Vibeke Jensen, head of Unesco Pakistan, while speaking at the launch of the album, said that she was thrilled to see the talent of artists who had collected best quality Sufi music from around the world. “Sufism is a great way of offering a counter narrative to the world, which is witnessing challenging times,” she added.

Jensen, while talking about the recent Paris attacks said that the Sufi musicians and poets from Pakistan were offering the best alternate.

Zulifqar Ali has recently completed a doctorate in music from the University of Sindh and had a degree in musicology from the National College of Arts. His younger brother Mazhar Hussain has a diploma in music instruments from the US.

“We are inspired by the poetry of Bulleh Shah and wish to compose music that aims to go beyond borders and represents a soulful journey of Sufism,” said Zulfiqar Ali before performing some songs from their new album.

Ibrahim Umer, a student who is a passionate listener of classical music said that it was great that Lok Virsa arranged a Sufi musical evening featuring Mazhar Hussain and Zulfiqar Ali.

Amjad, who was also attending the event, told The Express Tribune that he was particularly delighted to know that a Sufi music performance was being held at Lok Virsa. “Our new generation has failed to develop an interest in Sufi music, which means we are gradually forgetting our culture and traditions. Lok Virsa deserves credit for always ensuring that our traditions and cultures are promoted,” he added.

Mazhar has the credit of performing for Sindhi Association of North America, USA for the past four years.

The ECO Science Foundation (ECOSF) Chairperson, Dr Manzoor Soomro, who is also one of the founding members of Indus Cultural Forum, said that forum intends to bring all cultures of Pakistan together, so that the richness and beauty of diversity can be exchanged, celebrated and used to inspire peace, prosperity and harmony.

At the beginning of the event, one minute silence was observed to remember the victims of Paris tragedy. Participants also signed a petition condemning terrorist attacks in Paris, Pakistan and other places across the world.