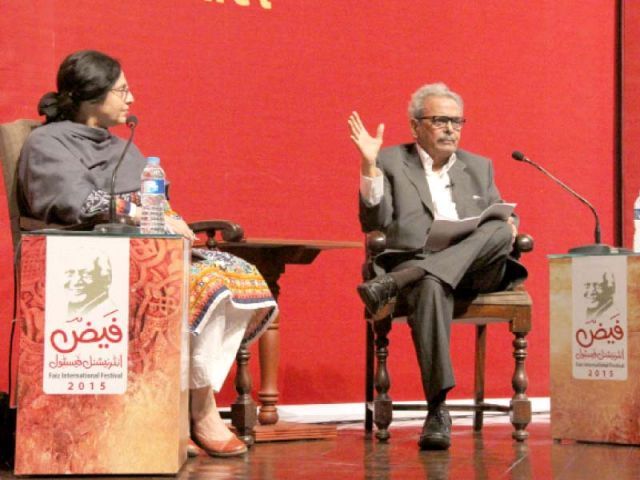 Faruqi, the keynote speaker, made the remarks in conversation with Yasmeen Hameed of Lahore University of Management Sciences Gurmani Centre for Languages and Literature on the second day of the Faiz International Festival.

He said not only was Faiz’s poetry widely read but his personality was such that he did not mind anything people said whether it was positive or negative. “In his century there has been no greater writer than him,” Faruqi said adding he was widely read and accepted. “Scores of people have sung his poetry because they accept his work,” he said talking about Faiz’s enduring popularity among the people. He said Faiz was amongst the few poets who had been fortunate to receive such great love and attention.

“There has to be more in Faiz’s work, beyond acceptability that makes it evergreen,” he said. Faruqi said one of the reasons why Faiz had been so widely accepted was that his work was emotional and could elicit a reaction a from most people. “Faiz wrote in a time when it was commonly understood that poetry should not be very complicated,” said Faruqi pointing to the general trend of the time. He said the idea prevailing then was that poetry should be understood by a large audience. Faruqi said Faiz’s poetry fit the criteria.

“His poetry articulated his beliefs and struck a chord,” he said adding it did not focus a lot on how the thought was being put forward. Faruqi said poets like Mir and Ghalib had given much thought to their choice of words. “Their poetry was complicated, especially Ghalib’s. It was not easy to understand,” he said.

Faruqi said Faiz’s poetry flowed more easily when read aloud. He said after Ghalib, Mir and Iqbal it was Faiz who was so well liked. Faruqi said poetry in the subcontinent had always focused on the oral tradition.

He said Faiz’s poetry had the power to move people despite its simplicity.  Faruqi said another reason why Faiz’s poetry was widely accepted was that it was not cumbersome.

He said Faiz fashioned a picture creating a scene regarding something happening but did not force the reader to become a part of it. He said Faiz did not even place this burden to act on himself often employing hum (we) in place of mein (I) in his work.