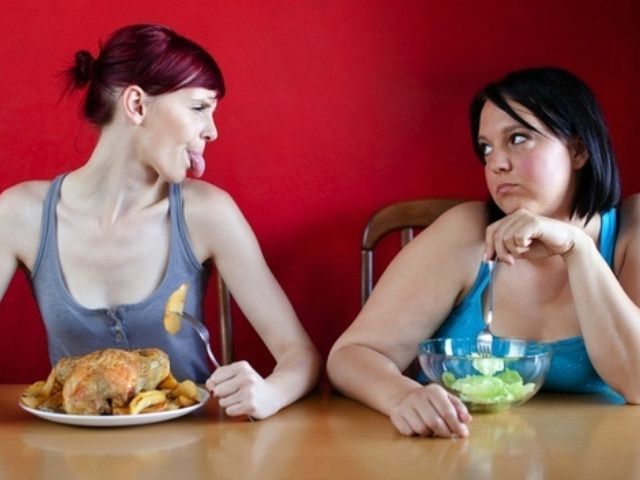 A healthy food for one person may lead another to gain weight, according to a study, a one-size-fits-all approach to dieting is fundamentally wrong.

For instance, one woman in the study repeatedly experienced a spike in blood sugar after eating tomatoes, which would generally be considered a low-fat, nutritious food.

The findings are based on a study of 800 people in Israel, and are published in the journal Cell Press.

“The first very big surprise and striking finding that we had was the very vast variability we saw in people’s response to identical meals,” said researcher Eran Segal of the Weizmann Institute of Science in Israel.

They also provided stool samples so that their gut microbiome could be analyzed, and kept a careful log of everything they consumed. None of the participants had diabetes, but some were obese and had a condition known as pre-diabetes.

Researchers were stunned to see the difference in people’s metabolic responses to the exact same foods. For instance, some people’s blood sugar rose higher after eating sushi than it did after eating ice cream.

And for one middle-aged woman, the act of eating tomatoes — which she thought were part of a healthy diet — actually caused her blood sugar to rise significantly.

“There are profound differences between individuals — in some cases, individuals have opposite responses to one another — and this is really a big hole in the literature,” said Segal.

High blood sugar is dangerous because it can lead to diabetes, obesity, heart problems and other complications, including eye, kidney and nerve disease.

Many diets aim to keep blood sugar low by incorporating fruits, vegetables and complex carbohydrates like brown rice and whole grains, while avoiding refined sugars and goods made with white flour.

But those recommendations don’t work for everyone, and often, overweight people are blamed for eating too much or not sticking to a healthy lifestyle.

8 things you will relate to if you hate sharing food

Co-author Eran Elinav said the study “really enlightened us on how inaccurate we all were about one of the most basic concepts of our existence, which is what we eat and how we integrate nutrition into our daily life.” Instead of urging people to eat low-fat diets, a more personalized approach — one that puts an individual at the center of the plan, rather than the diet — could be useful to help people control high blood sugar and improve their health, he said.

The researchers also used their findings to forge an algorithm that could predict how different people would react to certain foods, based on a host of personal characteristics and their gut microbes.

Segal said he and colleagues are now working on a system that could bring better nutritional analysis to the individual consumer.

The process would involve mailing stool samples for analysis of the bacteria in the digestive system, because researchers found that specific microbes correlated with blood sugar levels after eating.

The microbiome is the community of trillions of bacteria living inside the human body, wielding a powerful but poorly understood effect on human health.

Last month, a group of 48 scientists from 50 US institutions called for more ambitious research into these tiny microorganisms, as part of a 10-year effort known as the Unified Microbiome Initiative Consortium that would uncover the role of individual microbes — which include fungi, bacteria, viruses, algae and more — and how they communicate with each other, their hosts, and their environment.

6 foods that keep you warm in winter

According to Minisha Sood, director of inpatient diabetes at Lenox Hill Hospital in New York City, the Israeli study “highlights the importance of individualised nutrition — dietary advice should vary from person to person and should be tailored to meet the needs of a given individual based on their reactions to different foods.

“What remains to be deciphered is exactly how to tailor personalised nutrition therapy,” added Sood, who was not involved in the study.

“Should it be based, at least in part, on an individual’s microbiome or gut flora?”

Rebecca Blake, senior director of Clinical Nutrition at Mount Sinai Beth Israel, said the role of the gut microflora contributing to obesity and metabolism “is certainly an evolving discipline within the field of nutrition science.”

“However, we need to consider whether this is the chicken or the egg — does our diet affect our gut microbiota and our obesity, or is the microbiota somehow causal when it comes to weight status?” added Blake, who not involved in the study either.

“We still need a lot more research to figure out the nature of these connections.”