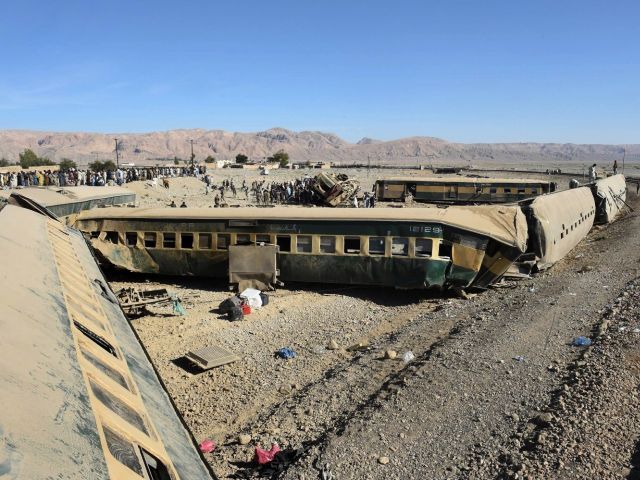 Security officials inspect damaged carriages following the derailment of a passenger train in Bolan district, some 75 kilometres from Quetta on November 17, 2015. PHOTO: AFP

QUETTA: At least 15 people were killed and over 100 injured on Tuesday when a Rawalpindi-bound train derailed near Aab-e-Gum area of Bolan district in Balochistan.

“The Rawalpindi-bound Jaffer Express derailed from its tracks after it left Quetta, killing at least 10 people,” Deputy Superintendent of Pakistan Railway told The Express Tribune.

The dead and injured were shifted to a local hospital and further investigations are underway. “Emergency has been declared in all government hospitals across Quetta,” Balochistan Home Minister Sarfarz Bugti said.

“Twenty-six seriously wounded passengers are being evacuated by Pakistan Army helicopters to Quetta from site of accident,” military’s media wing, ISPR, said in a statement. Security officials inspect damaged carriages following the derailment of a passenger train in Bolan district, some 75 kilometres from Quetta on November 17, 2015. PHOTO: AFP

The incident occurred as brakes of the Jaffer Express failed while the train was its way to Rawalpindi, an army officer said. “Two MI-17 helicopters of the Pakistan Army are taking part in rescue operation.”

Personnel of the Frontier Corps and Pakistan Army immediately reached the scene and started rescue and relief activities, he added.

Sources said the dead include two policemen, driver and assistant driver of the Jaffer Express.

“The incident happened because the brakes of the train failed,” he said, adding a rescue and relief operation had begun and officials had already arrived on the scene.

Faiz Bugti, a senior official of the railways department, and head of local community police Tariq Zehri also confirmed the accident and casualties.

Meanwhile, Prime Minister Nawaz Sharif, who is on a two-day official visit to Uzbekistan, expressed deep grief and offered his condolence over the loss of innocent lives in the incident, said a statement issued by his office.

The prime minister further directed the authorities concerned to provide better medical facilities to those injured.

This is not the first time that the Rawalpindi-bound train has met with an accident. Earlier this month, four people were killed and another eight injured when the train hit a home-made bomb planted on a railway track in Mastung district of Balochistan on November 1. An improvised explosive device (IED) was remotely detonated when the Jaffar Express chugged into Dasht tehsil of Mastung, 30 kilometres south of Quetta.

Railways Divisional Superintendent Faiz Muhammad Bugti had said the victims, all hailing from Quetta, were travelling to Punjab for holidays. “The four deceased were railway employees,” he added. A Balochistan Levies official said the IED was planted on the railway track in Isplinji area near Dasht. “One of the train carriages was also damaged.”

On June 6, the train was returning to Quetta when an explosion derailed four of its carriages near the Jacobabad district jail, leaving eight people injured. No group immediately claimed responsibility for the attack but Baloch separatists demanding greater autonomy have been waging an insurgency for years and the province is also riven by sectarian strife and extremist violence.