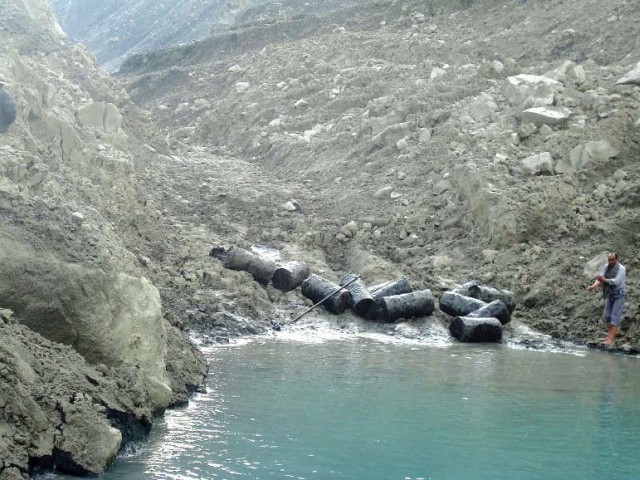 A view of the Attabad Lake spillway. PHOTO: FILE

GILGIT: As people affected by the Attabad landslide-triggered lake gathered in Gilgit to observe its first anniversary, the government in Hunza imposed a ban to stop processions and rallies planned by protesters as part of the January 4 black-day.

“We want action not words,” chanted the protestors who were holding placards in the main City Park in Gilgit on Tuesday.

Last year, on January 4, as many as 20 people perished, including children and women, after a small hamlet called Attabad in Hunza plunged into the Hunza River. This occurred following the creation of a natural lake that has now expanded 23 kilometres upstream and has submerged four villages.

The lake has marooned over 25,000 inhabitants of Gojal valley for the past one year as the government failed to drain the lake, though an attempt was made by creating a spillway.

Qamar Zaman Kaira, the former acting governor of Gilgit-Baltistan and the federal information minister had said that debris that had blocked the river would be removed and people will be rehabilitated.

“Where is Kaira who had claimed to drain the lake within 15 days of the incident,” read another placard.

Afiat Ali, a member of the Gojal Coordination Committee (GCC), said they have received enough relief but this was not the issue. “Our issue is that we have a gigantic lake in front of us that has ruined our routine life,” he said while addressing the rally.

Ali Qurban, another member of the GCC said people in Hunza have been stopped from taking out a rally by the imposition of section 144. “We are not taking out violent protests rallies. However it is our democratic right to protest against the government’s disinterested attitude,” he said.

The rally passed a 15-point resolution demanding the government to drain the lake as soon as possible.