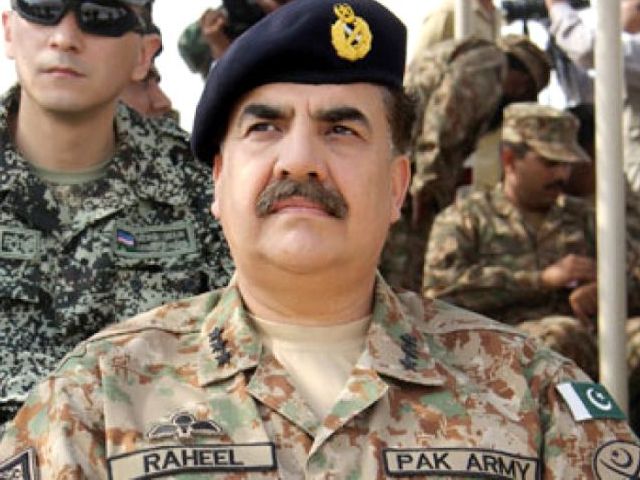 Army chief General Raheel Sharif met his American counterpart General Mark A. Milley at the Pentagon on Monday and discussed steps taken against terrorism, hurdles to peace in the region and India’s belligerent attitude.

Gen Raheel was warmly received at the Pentagon on Monday as he kicked off his five-day trip to the US.

With Afghanistan high on agenda, Gen Raheel flies to US

According to a local television channel, Gen Raheel briefed Gen Milley about progress in Operation Zarb-e-Azb and the steps taken to eradicate terrorism in the region. He also detailed efforts taken to maintain peace in the region and highlighted the hurdles they were facing.

Foreign secretary rules out presence of Islamic State in Pakistan

Pakistan had brokered the first peace talks between Kabul and the Afghan Taliban in Murree this year. The talks were cancelled after news of former Taliban supremo Mullah Omar’s death was leaked.

Terming it the biggest problem, the Inter Services Public Relations (ISPR) chief said that it was sad that news of Mullah Omar’s death was disclosed just when the first round of talks had been completed successfully and the second round was about to begin.

Noting that there were certain elements who wanted the peace process to fail, Lt Gen Bajwa said that he had always insisted that such elements must be kept in control so that the process could proceed.

This is the second time Gen Raheel has visited the US this year and comes just a month after Prime Minister Nawaz Sharif visited Washington where he met US President Barack Obama.

He is scheduled to meet senior military officials, as well as US Vice President Joe Biden, in the American capital, according to officials.