Riskin­g his own life, Safera, a Muslim of Algeri­an origin, brough­t the injure­d inside the restau­rant
By Web Desk
Published: November 16, 2015
Tweet Email 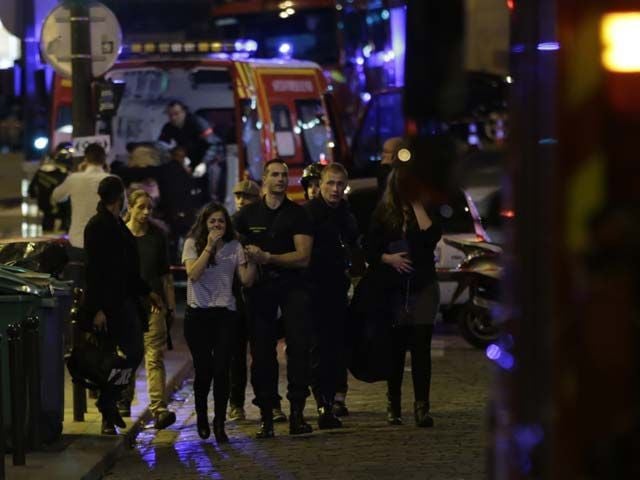 People are evacuated following an attack at the Bataclan concert venue in Paris, on November 13, 2015. At least 18 people were killed in multiple attacks in Paris Friday, including one near the Stade de France sports stadium. PHOTO: AFP

A Muslim restaurant worker on Friday night saved the lives of two injured women during the deadly Paris attacks that left over 129 dead and over 350 injured.

Recalling the horrifying incident, Safer, a Muslim of Algerian origin, said he was at work behind the bar of the Casa Nostra restaurant in Paris when the firing started. “I was at the counter. We heard explosions – really loud bangs. Everyone started screaming, glass rained down on us. It was awful. There was glass all over the place, hitting us in our faces,” he said.

How people in Paris helped strangers after terrorist attacks

It was then he saw two injured women outside the restaurant. “I saw two women out on the terrace had been hit. One in the wrist and in the other in the shoulder. They were bleeding really badly.”

Despite the obvious danger, Safer decided to help the injured and ran outside to the wounded women when the firing paused briefly and brought them inside the restaurant.

“I picked them up and rushed them downstairs to the basement. I sat with them and tried to stop the bleeding,” Safer added.

Recounting the horrors of that night, he said, “As we were downstairs, we could hear the gunfire continuing above. It was terrifying.”

As frightening as it was, they had in fact escaped much worse.

“When we came out we saw bodies in the street. So many were injured.”

Safer’s story resembles that of Lassana Bathily, who was hailed as a hero for hiding a group of frightened shoppers from the assault at the Kosher supermarket in January during the Charlie Hebdo attack.

Both, Safer and Bathily, are Muslim and both risked their lives.

Their stories represent the complex nature of Muslim relations in France as the community fears repercussions of these attacks.

When asked about his thoughts on the killers carrying their attacks in the name of Islam, Safer said, “This has nothing to do with religion.”

“Real Muslims are not made for killing people,” he said. “These are criminals.”

A Muslim security guard saved hundreds of lives when he stopped one of the suicide bombers from entering the Stade de France during the France-Germany exhibition game on Friday.

Zouheir, the guard at Stade de France, said at least one of the attackers had a ticket to the game and attempted to enter the 80,000-person venue, The Wall Street Journal reported.

He claimed that the attacker was discovered wearing an explosives vest when he was frisked at the entrance to the stadium about 15 minutes into the game. Spectators gather on the pitch of the Stade de France stadium following the friendly football match between France and Germany in Saint-Denis, north of Paris, on November 13, 2015. PHOTO: AFP

The attacker detonated his suicide vest while trying get away from security, he added.

Confirming the incident, a police officer said it is suspected that the attacker aimed to detonate his vest inside the stadium in order to provoke a deadly stampede.