The men were "lower-level" Yemeni detain­ees and each had been held for nearly 14 years withou­t charg
By AFP
Published: November 16, 2015
Tweet Email 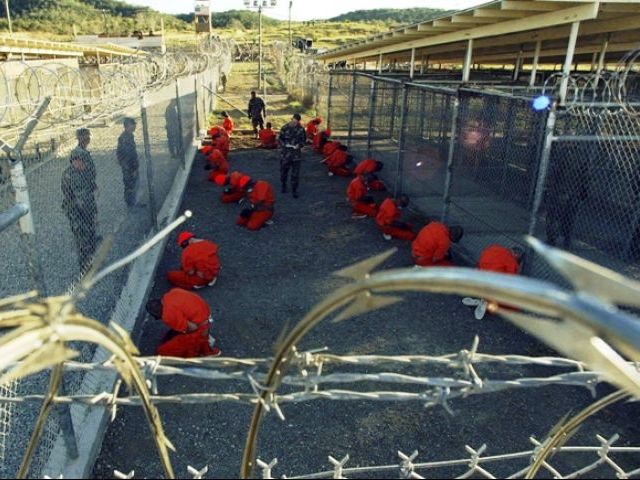 The move means that 107 detainees remain at Guantanamo Bay, the Pentagon said in a statement. PHOTO: REUTERS

WASHINGTON: The United States has transfered five detainees from Guantanamo Bay to the United Arab Emirates, the Pentagon said Sunday, another step in a long-delayed plan to close the controversial military prison.

The move means that 107 detainees remain at Guantanamo Bay, the Pentagon said in a statement, adding that it was “grateful to the government of the United Arab Emirates for its willingness to support on going US efforts to close the Guantanamo Bay detention facility.”

The men were “lower-level” Yemeni detainees and each had been held for nearly 14 years without charge, The New York Times said.

The UAE had previously taken in just one former Guantanamo detainee — a citizen of its own — in 2008, the newspaper said.

The United States opened Guantanamo to hold terror suspects following the September 11, 2001 attacks, and photos of shackled men in orange jumpsuits became a defining image of US foreign policy in the early 2000s.

Inmates were called “enemy combatants” and denied standard US legal rights, meaning many were held for years without charge or trial.

The Guantanamo population has dwindled, and prisoners no longer deemed a risk have either been repatriated or sent to a host country.

The Guantanamo prison costs the US taxpayer around $400-450 million annually, according to estimates.

“The United States coordinated with the government of the United Arab Emirates to ensure these transfers took place consistent with appropriate security and humane treatment measures,” the Pentagon added, saying the five had been cleared for transfer after thorough security reviews.

The US keeps a “very close eye” on those who have been released, but some figures have estimated that up to 30 per cent return to militant groups with the aim of carrying out attacks on Western targets.

But a US official has said that figure includes both confirmed and suspected cases. He said 16 per cent of freed inmates were confirmed to have returned to the battlefield, while about 12 per cent are suspected of having done so.

The latest transfers come with the Pentagon poised to release a much-anticipated report on shutting down Guantanamo Bay, even as Congress battles to block the transfer of the military prison inmates from eastern Cuba to US soil.

President Barack Obama made closing Guantanamo a key election pledge, but lawmakers have repeatedly thwarted him.

The report’s findings are sure to fuel debate on the fate of dozens of longtime captives from America’s “War on Terror” who may well spend the rest of their lives behind bars.

The Pentagon this year sent a team of experts to review US sites that could house dozens of the most dangerous detainees following the closure of the prison.

Guantanamo still houses five accused plotters of the September 11, 2001 attacks. Among them is the self-proclaimed mastermind, Khalid Sheikh Mohammed.

Guantanamo is also home to the man accused of masterminding the attack on the USS Cole in 2000, Abd al-Rahim al-Nashiri. He was captured in 2002 and transferred to Guantanamo in 2006.

All six face the death penalty if convicted.