Thousa­nds of people had flocke­d to visit the twins, who were born with two heads and two hearts but just one body
By AFP
Published: November 16, 2015
Tweet Email 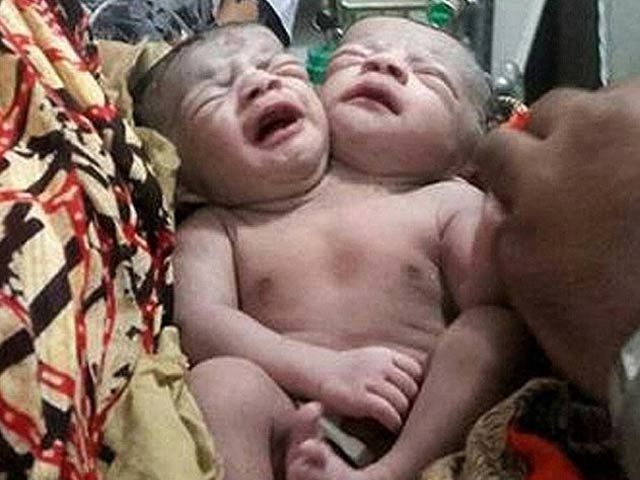 Thousands of people had flocked to visit the twins, who were born with two heads and two hearts but just one body. PHOTO: AFP

DHAKA: Conjoined twin girls have died in Bangladesh less than a week after they were born, the hospital treating them said Monday.

Thousands of people had flocked to visit the twins, who were born with two heads and two hearts but just one body, after news spread of the “miracle newborn” last week.

They were taken into intensive care at the Dhaka Medical College Hospital, Bangladesh’s biggest public hospital, which set up a team of specialists to treat them.

But the head of the intensive care unit said they died late on Sunday after apparently suffering from heart failure.

“She was not in a stable condition since she was born. She died before we could intervene,” said Abid Hossian Molla.

“She was a rare conjoined twins with two heads. She had two hands and two legs like any normal baby, but inside she had two hearts, two sets of lungs and shared pelvic organs.”

The twins’ father Jamal Mia said he had buried her at a public graveyard in Dhaka.

“I can’t afford to hire an ambulance to take her back home. So the doctors gave me some money to bury her in Dhaka,” Mia said.

“I feel sad for her as we could not do much to save her.”

Mia said he had not yet told his wife of the twins’ death because she was still “very sick” after giving birth by Caesarian section.

Conjoined siblings are identical twins who in rare cases are born with their skin and internal organs fused together, according to the University of Maryland Medical Centre website.

About half are stillborn, and the survival rate is between five and 25 percent.