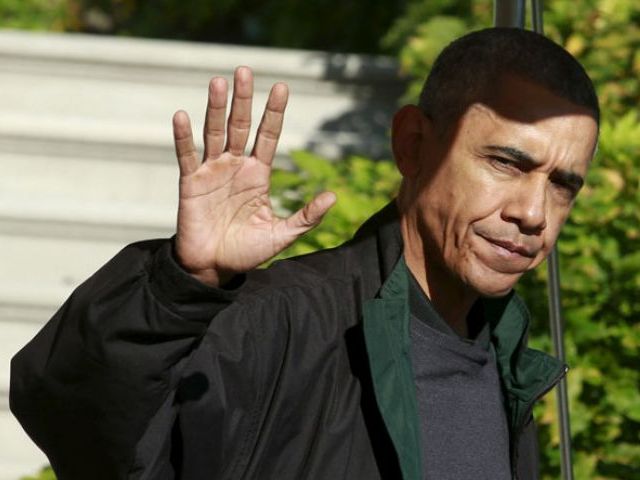 US President Barack Obama waves as he walks out from the White House in Washington, before his departure to Turkey on November 14, 2015. PHOTO: REUTERS

BELEK: US President Barack Obama will hold a bilateral meeting with Saudi Arabia’s King Salman at the G20 summit in Turkey on Sunday evening, a White House official said.

The two countries are partners in a coalition bombing
Islamic State militants in Syria.

The US president has arrived in Turkey for a summit of world leaders that has taken on a sense of urgency following deadly Paris attacks that pushed the fight against Islamic State militants to the top of the agenda.

Obama, who called the Paris attacks “an outrageous attempt to terrorise civilians” on the eve of his departure, faces the question of how the West should respond now that it has become clear that Islamic State poses a threat far beyond its militant strongholds in Syria and Iraq. US President Barack Obama (R) salutes to a marine on the South Lawn of the White House in Washington, before his departure to Turkey on November 14, 2015. PHOTO: REUTERS

Washington already expects France to retaliate by taking on a larger role in the US-led coalition’s bombing campaign against Islamic State.

But Obama also seeks to coax other European and Middle Eastern countries into more tangible steps to show their military commitment, a US official said before the president embarked on his nine-day foreign trip. Children present flowers to US President Barack Obama as he arrives at Antalya International Airport in Antalya, Turkey on November 15, 2015. PHOTO: REUTERS

It remains to be seen, however, whether the United States itself has an appetite for much deeper involvement after already stepping up air strikes and committing small numbers of special operations troops to northern Syria to advise opposition forces in the fight against Islamic State. US President Barack Obama disembarks Air Force One after arriving at Antalya International Airport in Antalya, Turkey, for the G20 summit on November 15, 2015. PHOTO: REUTERS

The two-day summit of the Group of 20 major economies brings Obama and fellow world leaders just 500 km from Syria, where a 4-1/2-year conflict has transformed Islamic State militants into a global security threat and spawned Europe’s largest migration flows since World War Two. US President Barack Obama disembarks Air Force One after arriving at Antalya International Airport in Antalya, Turkey, for the G20 summit on November 15, 2015. PHOTO: REUTERS

The coordinated attacks by gunmen and suicide bombers in Paris on Friday puts Obama and other leaders of the Group of 20 major economies under increased pressure to find common cause.

At least 127 people were killed in attacks on a concert hall, restaurants, bars and a sports stadium. US President Barack Obama leaves Antalya International Airport in his car after arriving for the G20 summit in Antalya, Turkey on November 15, 2015. PHOTO: REUTERS

Obama was due to hold bilateral talks with Turkish President Tayyip Erdogan before the start of the summit and later, at a working dinner with fellow leaders, to have in-depth discussions on Syria, ranging from counter-terrorism to the refugee crisis.