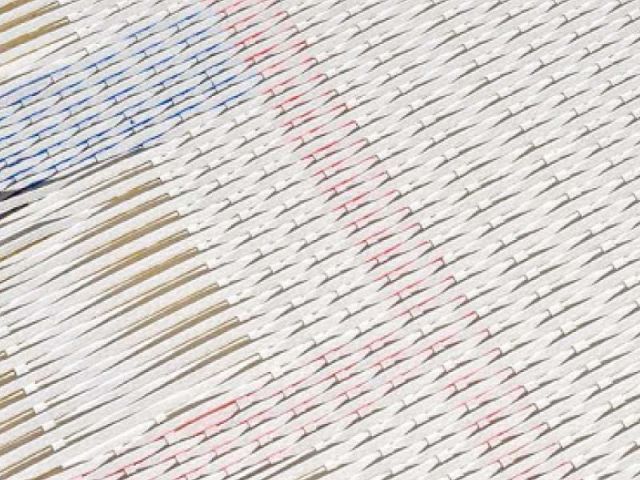 Ghulam Hussain’s artwork will be exhibited at the Satrang Art Gallery till December 8. PHOTO: HUMA CHOUDHRY

The young artist who graduated from the National Council of Arts in 2009 was moved by Mondrian’s work during his recent visit to Museum Of Modern Art in New York. “I can relate myself with the squares; rectangles and stripes weaved together,” he shared adding that his family has been his initial inspiration since most of them are craft oriented.

The intricate woven imagery has also been inspired by Hussain’s school note books. This exhibition stimulates each viewer’s imagination and exploration of one’s own memories.

“My childhood drawings, which filled my school notebooks, show my continued interest in basic shapes, vertical and horizontal lines. I prefer a humanistic approach to what makes a person happy, enriched, and fulfilled,” he added.

By retaining his own method of art making, hand crafting woven tapestries, each piece reflects his artistic prowess. The art of weaving is embedded within human society and particularly within Pakistan’s cultural traditions.  The craft has great historical significance and in an era where machines have almost completely replaced handmade items, Hussain highlights the delicacy and significance of human touch and design.

Speaking of the exhibition, Asma Rashid Khan, the Director of Satrang Gallery said “Hussain’s work presents beautifully woven patterns and designs, building a mesh of layers, where disparate individual threads come together in tapestry of colour, pattern and form to create a new formation.”

It not only pays homage to an age old craft, but it also demonstrates to the viewer the benefits of combining separate schools of thought, traditions and philosophies to form a new, mutually favourable fusion, she expressed.

These tapestries which appear deceptively white with occasional vertical and horizontal black lines when viewed full on reveal patterns of colour blocks and grids when seen from an angle. They morph into Neoplasticism forms, the term Mondrian called his minimalist, abstract paintings which were formed of black vertical and horizontal lines and blocks of primary colours – red, yellow and blue, curator of the exhibition Zahra Khan explained.

Building tolerance: Children need to be taught about coexistence: speakers