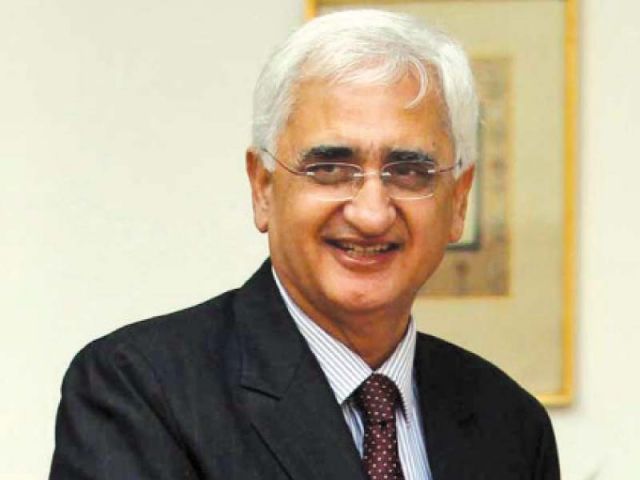 Whatever I have said and done in four hours here, Arnab Goswami will demolish in 15 minutes. This statement by the former Indian foreign minister, Salman Khurshid, summed up, part of the problem with trying to amicably resolve the India-Pakistan disputes.

Goswami, for those unfamiliar with the Indian media, is a TV show host who unapologetically tries to impose his opinions as facts and cuts off guests, mid-answer, which has made his show one of the highest rated programmes in the country. The same formula is generally successful in Pakistan, as well.

Khurshid blamed the “aggressive, intrusive media”, for confusing issues, while also criticising the khakis on either side of the border, for making anti-peace statements in the media, at his lecture here at the Jinnah Institute (JI) on Thursday.

“It is not for our military officers to deal with the media, but ours learn from yours,” he said, critiquing aggressive statements made by former soldiers.

And soldiers it was — most of them former generals — who filled much of the room at the JI’s lecture hall.

At the start of the event, Khurshid gave an overview of the cross-border relationship in recent times, noting that, “[Indian Prime Minister Narendra] Modi is not used to talking to people who disagree with him,” as he illustrated the problematic manner in which the incumbent Indian government approaches dispute resolution with Pakistan. He explained that Modi’s self confidence was in part due to the fact that he had not lost an election in over 20 years.

On PM Nawaz Sharif attending Modi’s inauguration, he said, “If you look back at the first face-to-face [meeting] between our PMs, your PM took a brave, farsighted decision.” Khurshid then lamented that, “What we (India) said and did, made things uncomfortable for Pakistan after the visit.”

As he moved onto peacemaking, he offered an interesting opinion. “If there has been a leader of democratic Pakistan who wanted peace with India, it is [Sharif, who] was the first non-military [Pakistani] leader to try for peace,” Khurshid said.

He elaborated that previous peace overtures from Pakistan came from military governments because the “military owes no one any explanations, and neither does the BJP”.

On secularism, Khurshid said, “When you deal with India, you are not dealing with a Hindu country. We will have the largest Muslim population in the world in a few years.” “We hold secular values dearly,” he stressed.

Khurshid said that peacemaking was possible within a generation, if there was will among the parties.

Khurshid said, “history is etched deep in our psyche, and we continue to lose, due to our strained relationship.” He said the socioeconomic costs of the dispute had led to “young dreams perish[ing]” on the battlefields.

He also noted that both countries had remarkable traditions of non-violence, while adding the Kashmir dispute should not spill over into terrorism.

“I don’t think anybody in Pakistan believes terrorism is a credible solution,” he added, referring to the Pakistanis’ own ordeal at the hands of militant groups.

Panellist ambassador (retired) Riaz Khokhar said that increased trade would be favourable for both sides. He also noted that, “We may not like Modi’s communal approach or anti-Pakistan sentiments, but he is still the PM of India,” and must be negotiated with.

Jinnah Institute Chairperson Sherry Rehman warned, however, that the strong public consensus in Pakistan for improved relations with India was breaking down due to conditionality and stark messaging by New Delhi.

On a side note, Khurshid to a question about various statements he had made during his time as foreign minister remarked, “everything politicians say need not be given significance.”