Aung San Suu Kyi has made it clear she will run the countr­y regard­less of who the NLD elects as presid­ent
By Reuters
Published: November 12, 2015
Tweet Email 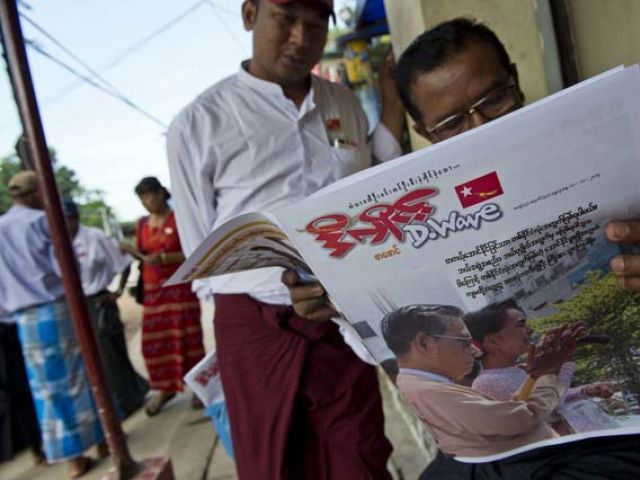 YANGON: US President Barack Obama called Myanmar leader Thein Sein to congratulate him on Thursday on the staging of a historic general election, in which democracy champion Aung San Suu Kyi trounced the ruling camp.

Suu Kyi’s opposition National League for Democracy (NLD) has won more than 80 per cent of the seats declared so far in the lower house, a result that puts her on course to form the new cabinet, and is well ahead in the upper house and regional assemblies.

If the full results confirm the trend, Suu Kyi’s triumph will sweep out an old guard of former generals that has run Myanmar since Thein Sein in ushered in sweeping democratic and economic reforms four years ago.

“US President Obama…congratulated the president and the entire government on having been able to hold a historic free and fair general election,” said presidential spokesperson and Information Minister Ye Htut on his Facebook page.

“He said America would continue cooperating with the Myanmar government.”

Obama has visited Myanmar twice in the past three years, hoping to make its transition to democracy a foreign policy legacy of his presidency.

Thein Sein and the powerful army chief Min Aung Hlaing have already endorsed Suu Kyi’s victory, congratulating her on Wednesday on winning the majority of the seats in the first free election in 25 years.

The two reiterated their commitment to respect the result and agreed to Suu Kyi’s request to hold reconciliation talks soon, although the parties are still to agree on the details.

Such unambiguous endorsements of Suu Kyi’s victory could smooth the lengthy post-election transition, ahead of the first session of parliament which reconvenes on Monday.

It also sets the stage for cooperation between democratic activists and the army, which had fought them during half a century of iron-fisted rule before a handover to a semi-civilian government in 2011.

“Congratulations … to the chairperson Aung San Suu Kyi and her party for gathering the support of the people,” read a statement posted on the Facebook page of the presidential spokesperson.

“The government will respect and follow the people’s choice and decision, and work on transferring power peacefully according to the timetable,” said the statement, adding that the president would work with “all other people” to ensure stability in the post-election period.

The armed forces also congratulated Suu Kyi. The military continues to wield considerable power in Myanmar’s political institutions, under a constitution drafted before the end of nearly 50 years of junta rule.

In addition to holding an unelected 25 per cent bloc of seats in parliament, the commander-in-chief nominates the heads of three powerful ministries – interior, defense and border security.

The interior ministry gives him control of the Southeast Asian nation’s pervasive bureaucracy, which could pose a significant obstacle to the NLD’s ability to execute policy.

It is unclear how Suu Kyi and the generals will work together.

“A people’s army should be hand-in-glove with the people. Military representatives in the parliament have told me more than once that they also want to be with the people,” Suu Kyi told Radio Free Asia in an interview on Thursday.

Relations between Suu Kyi and armed forces chief Min Aung Hlaing are said to be strained.

One of the biggest sources of tension between Suu Kyi and the military is a clause in the constitution barring her from the presidency because her children are foreign nationals. Few doubt the military inserted the clause to rule her out.

Although Suu Kyi reached out to the military establishment for reconciliation talks, she has become increasingly defiant on the presidential clause as the scale of her victory has become apparent.

She has made it clear she will run the country regardless of who the NLD elects as president.

“I make all the decisions because I’m the leader of the winning party. The president will be one whom we will choose just to meet the requirements of the constitution,” said Suu Kyi in an interview with Channel News Asia.

“He will have no authority. He will act in accordance with the decisions of the party,” said Suu Kyi, adding that the president will be “told exactly what he can do”.

Results so far gave Suu Kyi’s party 196 of 243 seats declared out of the 330 seats not allocated to the military in the lower house.

To form Myanmar’s first democratically elected government since the early 1960s, the NLD needs to win more than two-thirds of seats that were contested.

The NLD has said it is on course for more than 250 seats in the lower house, well above the 221 needed to control the chamber. Reuters was not able to independently verify the party’s estimates of its own performance.

Final results are due no later than two weeks after Sunday’s poll.