The attack­er was in Rawalp­indi's elite force and part of the Govern­or's convoy. Suspec­t under arrest.
Published: January 4, 2011
Tweet Email 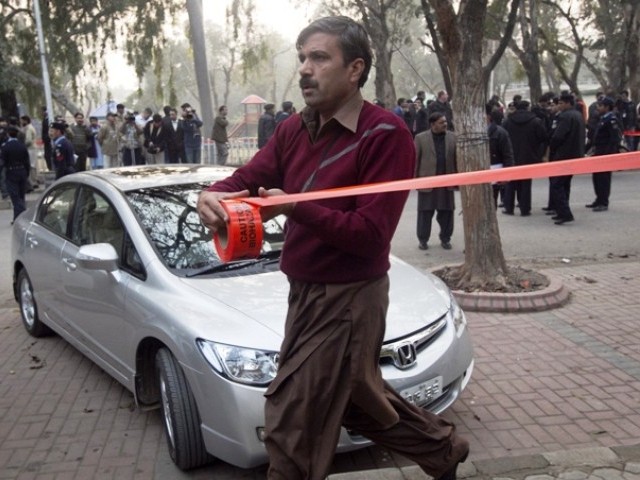 A plain-clothed policeman cordons off the site where the governor of Punjab province Salmaan Taseer was shot dead. PHOTO: REUTERS

ISLAMABAD: Punjab Governor Salmaan Taseer was attacked and killed in a firing incident in Islamabad’s Kohsar market on Tuesday.

The late governor was shot in Kohsar Market by one of his security guards, an elite force personnel, who has been identified as Malik Mumtaz Hussain.

A spokesperson of the Polyclinic Hospital confirmed that the governor had been hit by 25 bullets, while witnesses at the site said that he had died on the spot.

Interior Minister Rehman Malik revealed that the arrested man had admitted to the murder and ruled out inadequate security as a possible cause of the attack.

The federal government has announced a three day mourning period.

The funeral will be held at the Governor’s House tomorrow (Wednesday).

PPP leader Raja Riaz will be making arrangements for the funeral to be held at Governor’s House.

Protests are being taken out in different parts of Punjab.

A three member panel has been formed to perform Taseer’s autopsy.

Registrar Lahore High Court has announced that all courts in Punjab will remain closed tomorrow.

President Asif Ali Zardari has strongly condemned the assassination of Governor Punjab Salmaan Taseer today and directed the Interior Minister Rehman Malik to personally supervise the investigations and report to him urgently.

Spokesperson to the President Farhatullah Babar said that President was informed about the tragic assassination during a meeting of the PPP MPAs of four districts in the Bilawal House after which all the meetings scheduled for today were postponed to a later date.

The President also directed the Party leadership that the birthday functions in connection with Shaheed Zulfikar Ali Bhutto’s 83rd birth anniversary on Wednesday be limited only to holding of seminars at district, divisional and provincial levels without fanfare and without cake cutting ceremonies. Quran Khwani for Shaheed Zulfikar Ali Bhutto and Salmaan Taseer will also be held on Wednesday as part of the birth anniversary functions of Party’s founding Chairman, he said.

Interior Minister Rehman Malik says the first point of investigation will be to find out whether the suspect Qadri carried out the attack as part of a larger plot or on his own.

In life, Salmaan Taseer was never afraid of controversy and was never one to remain silent even when his stance on issues like militancy and the blasphemy law brought the venom of the right wing pouring on to him. Zarrar Khuhro

Chief Minister Punjab, Shahbaz sharif has arrived at the hospital.

Interior Minister Rehman Malik says investigation has been ordered into how the assassin Qadri was selected for the security of the governor.

Interior Minister Rehman Malik has said that all personnel of the governor’s security convoy have been arrested.

The Pakistan Peoples Party (PPP) has announced a two week mourning period. All functions of the party have been postponed.

All VIP functions are under threat says Interior Minister Rehman Malik, adding that, “our colleagues criticise us when we increase vip security”.

According to Syed Ali reporting for Express 24/7, the arrival of a huge crowd of people to Polyclinic is causing chaos at the hospital and preventing Governor Punjab’s body from being moved to PIMS for a post-mortem.

The name of the guard who carried out the attack has been confirmed as Mumtaz Qadri.

Saba Imtiaz: According to Rehman Malik, Salmaan Taseer’s guard shot him because he called the blasphemy laws a ‘kala qanoon‘.

Karachi has been put on high alert after the attack.

The Governor of Punjab was leaving his residence in Islamabad when one of his guards shot him in the chest.

President Asif Ali Zardari and Prime Minister Yousaf Raza Gilani have condoled over the death of the Punjab Governor.

An eyewitness, while speaking to the police, has provided his account of how the gunman aimed at Taseer and shot him.

The suspect is being held and interrogated by Rawalpindi police.

Attackers were part of the governor’s convoy, witnesses say.

Police source say they have arrested a suspect in the attack.

The governor died on the spot, according to governor house spokesman Farrukh Shah.

According to initial reports, unidentified persons fired upon the governor’s convoy and he was shifted to the Polyclinic hospital for treatment.