I am not Malala: Teachers release novel against Nobel Peace winner

I am not Malala: Teachers release novel against Nobel Peace winner

Book mocks US' war on terror, and talks about Pakist­anis who take pride in being Pakist­anis unlike Malala­
By Web Desk
Published: November 12, 2015
Tweet Email 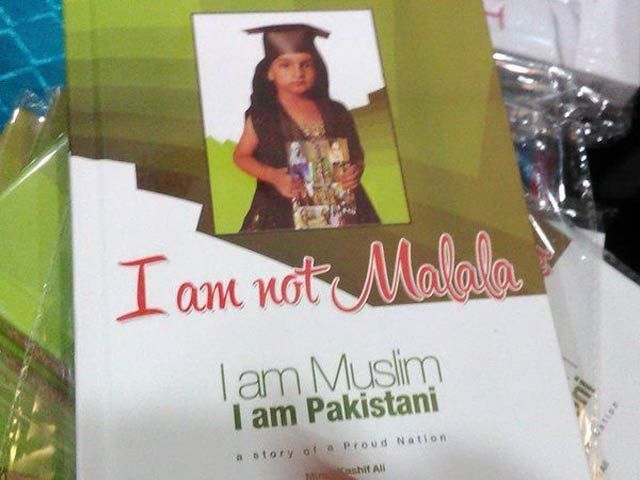 I am Not Malala, I am a Muslim, I am Pakistani is an account of Pakistanis who take pride in their country. PHOTO: ASMA GHANI

The All Pakistan Private Schools Federation (APPSF) launched a rebuttal to Malala Yousafzai’s novel ‘I am Malala’ by releasing a book titled ‘I am not Malala, I am a Muslim, I am a Pakistani’ at the National Press Club in Islamabad.

“The book is written with the aim to reveal the truth and counter anti-Islamic propaganda and expose the nefarious designs of anti-Islam forces,” said the author of the book, Mirza Kashif Ali, President All Pakistan Private Schools Federation (APPSF).

Much ado: School associations slate ban on ‘I am Malala’

“I am Not Malala, I am a Muslim, I am Pakistani” was introduced in a ceremony chaired by Ali at National Press Club in Islamabad.

“I am Malala” describes Malala’s life under the Taliban’s brutal rule in the Swat valley in the mid-2000s and hints at her ambition to enter Pakistani politics.

Some private schools banned it from their premises last year due to what they called its “anti-Pakistan and anti-Islam content”.

APPSF which comprises of a total of 173,000 private schools termed the Nobel Peace Prize winner’s book ‘controversial’, banning it in all private schools and colleges as a result.

Earlier in a statement, Adeeb Javadani, the central president of All Pakistan Private Schools Management Association (APPSMA) said that the book, the book was meant for the Western audience and did not receive much appreciation in Pakistan – a fact that had already decided its fate.

Further, APPSF announced its decision to take the matter to court on November 13, in order to ban the book across the country.

“Malala is a darling of the west and Shiv Sena, the same people who created al Qaeda and the Islamic State (IS), have created Malala,” Ali said.

The book, “I am not Malala”, aims to tell the readers that Malala, by comparing the Army with militants, the young literati is actually bashing the Army under the garb of female education.

Further, while the book praised Aitizaz Hasan, the young student who sacrificed his life to save his schoolmates by tackling a suicide bomber, it also questions her indifference towards Israeli aggression or the ongoing brutality in Gaza, which she did not mention in her book for while she spoke against the atrocities of Boko Haram in Nigeria, thus concluding that Malala is loyal to the Jews and the west.

“She has formed strong nexus with Salman Rushdie and Bangladeshi writer Tasleema Nasreen, and also believes in their ideology,” he alleged. “Malala says that she does not fear the Taliban any longer but will she return to Pakistan if she has no fears?” he questioned. “She will never do so because she will lose support of her masters and the easy money flowing in,” he further alleged.

‘He named me Malala’: Portrait of girls’ education icon

The rebuttal of Malal’s book also portrays her father, Ziauddin Yousafzai as a ‘double agent’, electricity thief and a traitor based on his demand to hand over Shakil Afridi, the man who allegedly ran a fake vaccination campaign with CIA’s help to gather information in order to assist the US trace Osama bin Laden.

However, Ali stressed that the organisation went on a countrywide strike in order to show solidarity with Malala when she was attacked.

“We are not against her but the ideology being imposed on us by such traitors and billions of dollars of Malala Fund are being used for this to introduce secular curriculum.”

This article originally appeared on The Nation