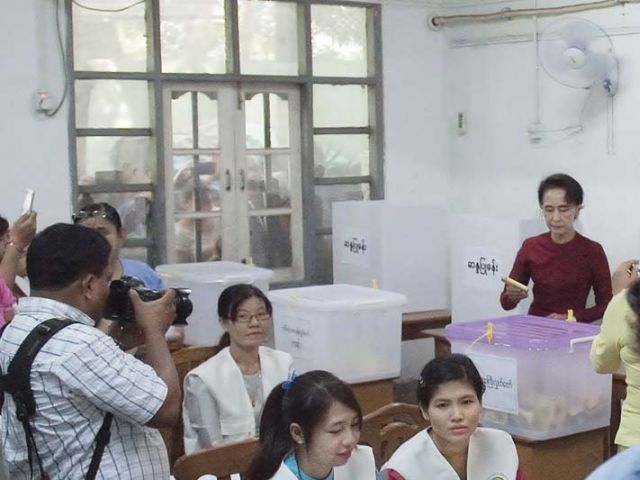 Onlookers peer through a window as Aung San Suu Kyi casts her vote at a polling station in Yangon. PHOTO: AFP

Myanmar held its first free nationwide election in 25 years on Sunday, the biggest step yet in the country’s journey from dictatorship to democracy.

The historic polls sparked boisterous celebration among supporters of pro-democracy opposition leader Aung San Suu Kyi in particular. Although the outcome of the poll will not be clear for at least 36 hours, Suu Kyi’s National League Democracy (NLD) is expected to win the largest share of votes cast by an electorate of about 30 million.

But a legacy of rule by military junta means Suu Kyi, who led the campaign for democracy, cannot become president herself. And whatever the result, Myanmar is heading into a period of uncertainty over how she and other ascendant parties negotiate sharing power with the still-dominant military.

A pariah state until a few years ago, Myanmar has had little experience organising elections. Some 10,000 observers were enlisted to scrutinise the process. Early indications from the monitors were that voting was mostly trouble-free, with only isolated irregularities.

“From the dozens of people we have spoken to since 6am today, everybody feels they have been able to vote for whoever they wanted to in security and safety,” said Durudee Sirichanya, one of the international observers.

In the city of Mandalay, about 100 people were stopped from voting after officials discovered they were outsiders who had been mysteriously added to the register and then bussed to the polling station.

Many voters doubted the military would accept the outcome of the vote if the NLD wins.

But in the capital, Naypyitaw, military Commander-in-Chief Min Aung Hlaing said there would be no repeat of the last free vote in 1990, when Suu Kyi won but the army ignored the result. She spent most of the next 20 years under house arrest before her release in 2010.

“If the people choose them (the NLD), there is no reason we would not accept it,” the senior general told reporters.