Jaun Elia’s rebirt­h on social media owes to both his genius and testin­g times of today
By Ali Raj
Published: November 7, 2015
Tweet Email 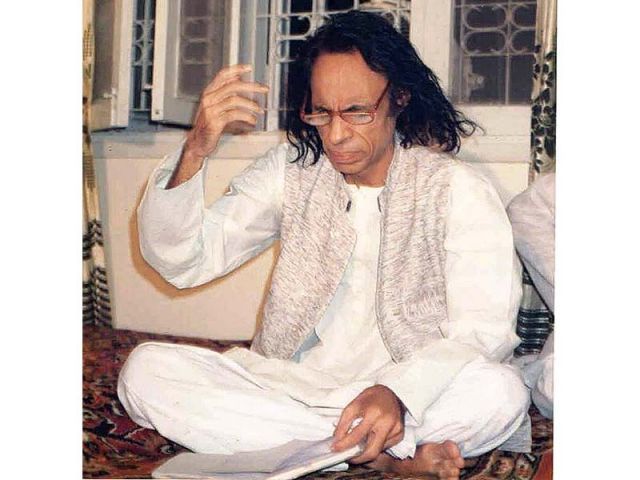 Jaun was trained in languages, political philosophy, astronomy and classical traditions, yet he was no Faiz Ahmed Faiz. PHOTO: FILE

What to do of a man who spent his life questioning the necessity of his own existence? A man who romanticises tuberculosis? On the flipside, as his niece Shahana Rais notes, pines for a woman who’d commit suicide in his love. Why does he continually tell his late father Shafiq Hasan Elia, ‘Baba, I could never grow up’? Why this arrogance in his nihilism?

These are questions that hover around the contradiction called Jaun Elia —  the man who breathed his first in a household of literary giants, and last in a house that wasn’t even his. Why would anyone want to read the works of a man who never wanted to publish them himself? A man who was too forward for societal sensibilities, relationships and compromises?

For some, Jaun’s behavioural theatrics defined him. As Yousufi notes, Jaun would call anyone and everyone ‘jani’ except his wife. For others, Jaun gave meaning to their everything. Jaun was trained in languages, political philosophy, astronomy and classical traditions, yet he was no Faiz Ahmed Faiz or Josh Malihabadi.

He was a polymath in his own right, a practitioner of sehl-e-mumtana (easy to understand writing), whose choice of words made actualisation easy for the boy whose love-interest deserted him, or for the sensitive teenager who felt all is not right in his surroundings.

Today, social media is rife with Jaun’s poetry. Bookstores are piled high with the Farnoods and the Lekins. “I was never interested in Urdu literature. When I came across Jaun, I felt my musings were channelised … Jaun taught me how to think,” says undergraduate student Fatima Tauseef.

Khalid Ahmed Ansari is the man that Fatima and thousands of others like her need to thank. Khalid met Jaun for the first time back in 1992 at a spare parts shop near Waterpump, Karachi. He last met him at the residence of Allama Ali Karrar, where the poet was living, thanks to a turbulent personal life.

Between these two meetings, Khalid became Jaun’s confidant, a disciple of sorts. Before his death, Jaun handed over most of his unordered writings and drafts to Khalid, who went on to make the most of the poet’s works accessible to the masses. Khalid’s brainchild, Gumaan (2004), is a collection of Jaun’s works that was given the best poetic collection award by the Pakistan Academy of Letters.

Interestingly, there is still a lot more of Jaun to come to the fore. His epic poem, comprising 18 alwah, Ramooz, is set to go in print very soon. “Once Ramooz is out, I will begin work on his next collection of poetry called Kyun,” he tells The Express Tribune.

“Jaun bhai used to like my handwriting so he would dictate a lot of his works to me,” he says. Khalid prefers to remain within the shadows and does not seek any limelight for his contribution to Jaun’s legacy. “His writings made me do (publish) all this … things happened by themselves.” Over two decades have passed but Khalid’s conviction is unmoved. “I started Jaun bhai’s Facebook page in 2009. With whatever design expertise I had, I started making posters of his poetry. Today, they are all the rage,” he says.

“Aj ki saari shayari Jaun bhai ke andaaz mein horahi hai,” he maintains, driving home the point that Jaun’s contribution is indeterminable. Khalid believes parallels cannot be drawn between Jaun and any other thinker. “With all the evident bitterness, he attacks you, shakes you up,” adds Khalid.

In memoriam: Of romance, resistance and lost medals

Noted critic professor Sahar Ansari concurs with how a comparison is unfair. “Jaun had a voice of his own that reverberates within everyday subjects,” he says. When asked what makes the late poet’s views click with the youth of today, he states, “Jaun’s writing style is both oblique and simple. He uses simple language to express complex ideas that stay with you.”