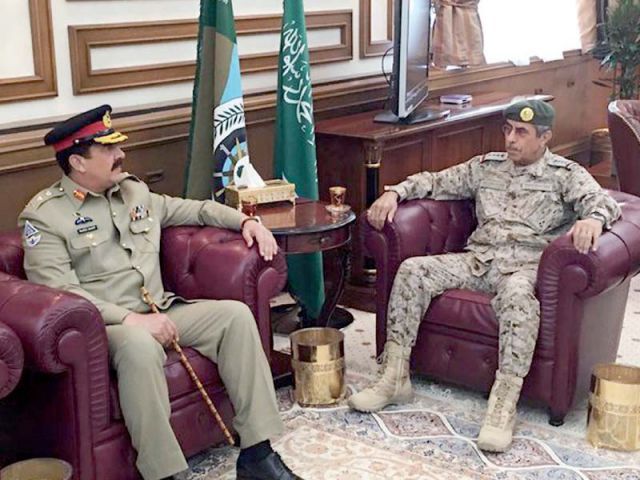 Army chief General Raheel Sharif on Tuesday arrived  in Saudi Arabia on a two-day visit that seems to aim at repairing ties between the two countries, following Pakistan’s refusal to join the Saudi-led coalition against Yemen rebels.

The visit appears to be a move to overcome the unprecedented hiccup in ties between the two countries after Pakistan’s parliament voted against joining the Saudi-led alliance against the Houthi rebels in Yemen in April this year.

But tensions have eased a bit in recent months as Pakistan and Saudi Arabia’s special forces conducted joint counter-terrorism exercises in Pabbi at the army-run National Counter Terrorism Centre.

Addressing the concluding ceremony of the exercise, the army chief had made it clear that any threat to the sovereignty of Saudi Arabia would evoke a strong response from Pakistan.

Pakistan and Saudi Arabia have a longstanding defence and military relationship. However, the two countries have been at odds in recent years over key regional issues, including the ongoing conflicts in Yemen and Syria.

Islamabad has adopted a more neutral approach instead of taking a clear position on the hotspots in the Middle East. The visit of army chief is also aimed at increased cooperation between Pakistan and Saudi Arabia in the wake of the threat posed to the kingdom by the ultra-orthodox terrorist outfits Islamic State, also known by its Arabic acronym Da’ish.

‘Century with partner’ comment taken out of context: Reham