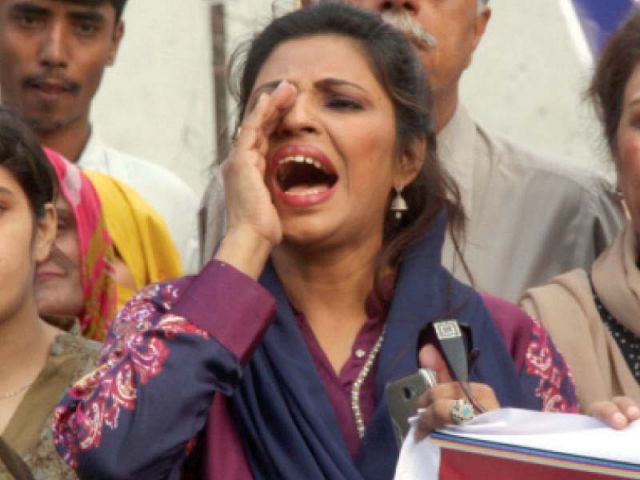 KARACHI: Pakistan Muslim League – Functional (PML -F) lawmakers have demanded the registration of an FIR of the Khairpur incident against the Sindh government, local administration and Pakistan Peoples Party (PPP) leaders. Their demand was shared by members of the Sindh Writers and Thinkers Forum (SWTF) who allege that the provincial government and the Election Commission of Pakistan (ECP) are responsible for the killings.

“The chief minister should have resigned after this horrific incident. This shows the incompetency of the Sindh government that has given a free hand to criminals to target PPP opponents,” said MPA Nand Kumar at a press conference on Tuesday. Kumar was accompanied by other lawmakers of the party, including Mehtab Akbar Rashdi and Rafique Banbhan.  The MPAs claimed that the PPP was a greedy party that killed innocent people for power. “Before the local government elections, we had expressed our reservations before the provincial election commissioner, requesting him to deploy the army at polling stations, but they turned a blind eye to it,” said Kumar, who is also the parliamentary leader of the PML-F in Sindh Assembly.

He warned that the workers were ready to avenge the killings of their comrades, adding that: “All the followers of the Hur Jamaat are just waiting for Pir Pagara’s permission. The situation can spiral of control,” said Kumar.

Referring to PPP minister Nisar Khuhro’s earlier statement, which had claimed that the victims were affiliated with the PPP, he said: “Why did Nisar Khuhro not attend funeral of the deceased if they belonged to the PPP. He should be ashamed of such kind of statements,” he said, adding that Nisar Khuhro was trying to become the champion of democracy, but he was one of the people who had distributed sweets to celebrate the death of Zulfikar Ali Bhutto.

MPA Mehtab Akbar Rashidi said that CM Qaim Ali Shah should have tendered his resignation after the incident. “If the CM is not willing to leave his office, he should at least remove the district SSP,” she said, adding that instead of taking action against the police officer, the Sindh government had included him in the inquiry team.

She said that the provincial government always nominates Additional IG Sanaullah Abbasi to investigate every incident because the latter has close links with the ruling party and its leaders. “The PPP talks about democracy,” she said. “What kind of democracy is this where the PPP leaders have nominated their kith and kin for the coveted slots in the local government elections?” she questioned.

Meanwhile, Kumar submitted a resolution to the secretariat to be taken up in the next assembly session, condemning the Khairpur incident. The resolution reads: “Due to negligence of the Sindh government, 12 innocent people have been killed in Daraza Sharif. This assembly condemns the incident and demands action against the culprits.”

Meanwhile, members of the SWTF held a demonstration outside the Karachi Press Club on Tuesday where they shouted slogans against former president Asif Ali Zardari. They said the bloodshed on polling day was a clear message that there was no rule of law across Sindh. Dastgheer Bhatti, a senior leader of the SWTF, said that the Sindh government had failed to respond promptly after the killings of a dozen innocent persons in the chief minister’s home district. “No action was taken against the killers. Only a police official was suspended,” he said, adding that: “We want rule of law and I fear more people will be killed if concrete measures aren’t taken for the upcoming elections in the remaining districts.”

‘Those responsible for desecration should be tried under the blasphemy law’