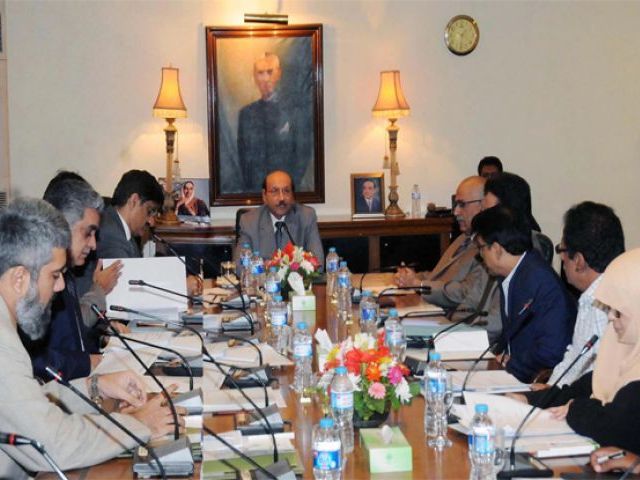 Chief Minister Qaim Ali Shah presiding over a meeting to review the progress of the education department. PHOTO: PPI

KARACHI: The Sindh government is considering declaring education as an ‘essential service’ so that the working of teaching staff in schools can be improved and further strengthened. Under this arrangement, union activities will be banned.

The education secretary told the CM that he has developed a biometric system through which the attendance of teaching staff is not only verified but monitored. “Over 90 per cent of the data on teachers has been uploaded in the system and it has started working,” he said. According to him, appointments, transfers and promotions are being verified through this biometric system. “In various districts, some promotions have been found illegal and necessary action has been taken,” he said, adding that this system has also helped trace out ghost employees, late comers, habitual absentees and bogus appointments.

The CM asked him about how the enrolment ratio has improved during the last few years. Pechuho said that it has improved by two per cent. “It was 52 per cent in 2002 and now it stands at 54 per cent,” he said. Shah expressed dissatisfaction, saying that it must be improved and treated like a mission than a target.

The chief secretary said that he had developed a close working relationship between the education department, Sindh accountant-general and finance department. “Through this coordination, the matter of bogus appointments has come to an end because the Sindh accountant-general does not accept such orders until they are sent to them by the education secretary with his code,” he said.

Memon said that various bogus appointments were traced out in Sukkur and Matiari while illegal promotions were found in Qamber-Shahdadkot. To this, Shah said, “Not only should recoveries be made from the people involved in illegal appointments and promotions but cases must also be registered against them.”

The CM expressed displeasure over the press statements of the teachers’ associations and said that their job was to take classes. He also directed the education secretary to follow the case in the Supreme Court in which some teachers have challenged the separation of teaching and management cadres. “Teachers should not be given management as they are meant for teaching. Their teaching capabilities should be enhanced instead of wasting them in administration.”

Meanwhile, primary teachers in Nawabshah closed down their schools and announced a boycott of elections duties during the upcoming local government polls on the call of Primary Schoolteachers Association. The union has been protesting against the education secretary for his ‘negative’ attitude towards primary schoolteachers.