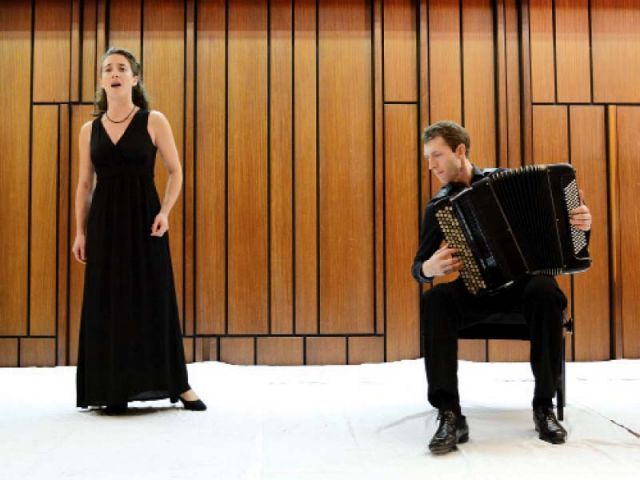 The recital was a tribute to Johann Sebastian Bach, a German composer and musician of Baroque period. PHOTO: HUMA CHOUDHARY/EXPRESS

ISLAMABAD: The German embassy is well known for hosting the most interesting, unique and diverse events including diplomatic receptions, dinners, recitals, classical music concerts, bazaars and more. It collaborated with the French embassy for a recital, on Monday, featuring classic musicians, Juliette de Massy and Bogdan Nesterenko from Europe.

The recital titled ‘Over the Mountains, from Bach to Piazolla’ was a tribute to Johann Sebastian Bach, a German composer and musician of the Baroque period. Among the various songs performed at the recital were La primera palabra, Libertango, Toccata et fugue en re mineur, Seufzer, Tranen, Kummer, Not and Eilt, Ihr Stunden and Oblivion. Some of these were by Astor Piazzolla, while most of them by Bach.

German Deputy Head of Mission Peter Felton opened the event on a sombre note, offering condolences for lives lost in the earthquake that occurred a few hours earlier.

French Ambassador Martine Dorance welcomed the guests — mostly members of the diplomatic community. She also presented flowers to the artists.

Speaking to The Express Tribune, de Massy said that she had been to Pakistan earlier and it was great to be back. “The weather is beautiful and the trip has been great so far. We intend to travel to Lahore and Karachi for performances together,” she said. She has studied in London and performed all over Europe, and was singer of the recital, while Nesterenko played accordion.

Born and bred in Ukraine, the accordionist received his training from the Soviet school of classical accordion. He graduated from the music academy of Kharkov and is a prize winner in many international competitions. Since 2006, he has been living in Lille, and has given a large number of recitals in France and all over Europe, some of which were entirely devoted to Baroque music.

Nesterenko said that it was his first trip to Pakistan even though he has travelled extensively for recitals and performances. “I am thrilled to perform in Islamabad, Lahore and Karachi,” he added.