More people satisf­ied with perfor­mance of CM Punjab than any other chief minist­er
By Ismail Sheikh
Published: October 28, 2015
Tweet Email 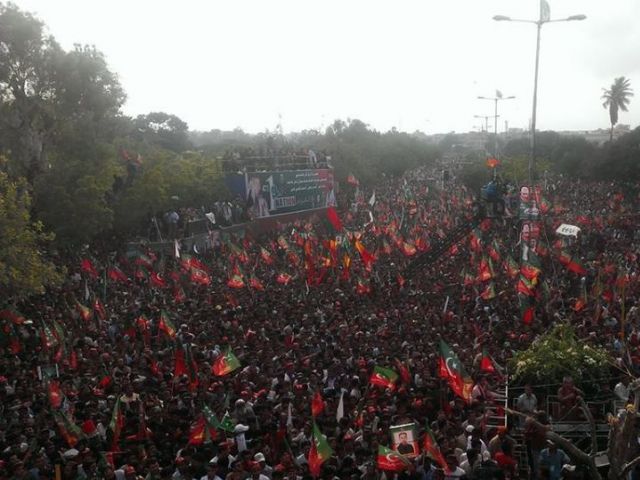 32.5% of the respondents said they would vote for Imran Khan’s PTI if elections are held tomorrow PHOTO: PTI

KARACHI: A new survey has found Imran Khan’s Pakistan Tehreek-e-Insaf (PTI) to be more popular than the ruling Pakistan Muslim League-Nawaz, just days after another recent survey declared Prime Minister Nawaz Sharif more popular than any other leader in the country.

According to the Political Barometer 2015, conducted by the Sustainable Development Policy Institute, 32.5% of the respondents said they would vote for Imran Khan’s PTI if elections are held tomorrow, while over 27% picked PML-N. While only 14% said they’ll vote for PPP, the party is still strong in Sindh with over 41% respondents in the province willing to vote PPP.

As per the survey, with 23% of votes, people consider unemployment the biggest challenge Pakistan is facing, followed closely by corruption at 21%. Terrorism and load shedding are considered the third biggest problems.

Almost half of the total respondents believe that corruption has increased in the last three years and see the police as the most corrupt department. The media is viewed as the least corrupt segment of society with just one per cent of votes. Meanwhile, 27% of people believe that the army and Rangers have played a significant role in controlling corruption in the country, along with the media and superior judiciary. Although the PTI came out as the most popular political party in the country as per the survey, Punjab Chief Minister Shahbaz Sharif fared better than any other chief minister with 49% of the respondents from Punjab satisfied with his performance, followed by Khyber-Pakhtunkhwa Chief Minister Pervez Khattak with 43% of the respondents claiming they are satisfied with his performance.

On the other hand, people of Sindh are the least satisfied with their chief minister with only 11% voting in favour of his leadership. Additionally, 65% of the respondents believe that Punjab is better at maintaining the law order situation than the rest of the country.

To a question regarding economic performance of the incumbent government, 55% responded that they are not satisfied with the federal government’s performance.

According to the survey, 57% of the respondents believe that PTI’s months-long dharna adversely impacted the performance of the government in terms of economic development, while 27% disagreed.

Responding to a question regarding Local Government system, an overwhelming majority of 74% said they are in favour of it.

Meanwhile 66% of the respondents believe that security situation has improved in last three years, while 79% see a ‘foreign hand’ behind terror activities in Pakistan. Of these, 55% held India responsible for attacks, while 28% believe the US is behind all attacks. Interestingly, responding to the question of who should take the lead in countering terrorism, 53% say both civil and military leadership should jointly lead the efforts.

On the foreign policy front, 30% believe that political parties influence policy while 25% say the US is most influential in this regard.