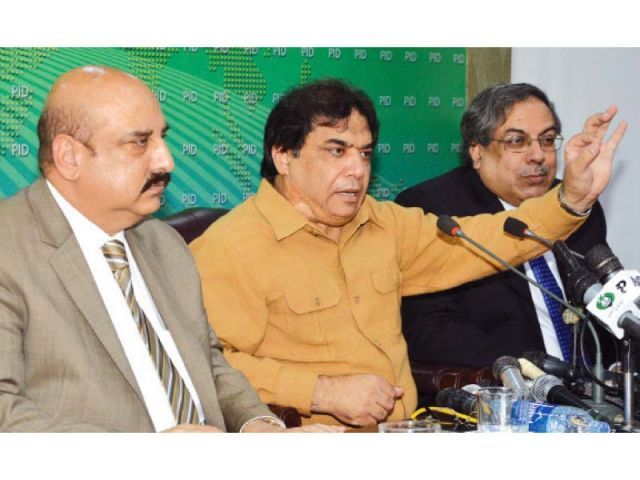 Abbasi said a preliminary inspection of the track had been conducted. PHOTO: EXPRESS

ISLAMABAD: Authorities on Tuesday dispelled reports about damages caused to the metro bus track due to Monday’s earthquake.

They denied media reports claiming cracks appeared in the elevated track, saying it was intact and safe. “Contrary to media reports, no structural issue has been reported in the recently-constructed elevated metro bus service (MBS) corridor due to the earthquake,” said Hanif Abbasi, chairman of the MBS monitoring committee. He was addressing a press conference along with Rawalpindi Commissioner Zahid Saeed and Nespak General Manager Danish Raza.

Abbasi said following media reports, a preliminary inspection of the elevated and underground MBS corridor was carried out which showed the track was completely intact.

Abbasi said following the earthquake, engineers of the Rawalpindi Development Authority (RDA), representatives of contractors’ firms, and Nespak carried out a preliminary inspection.

“Gaps between the pillars and elevated surface showed by the media were left deliberately during construction phase,” Abbasi said, adding structure was super strong and could resist extreme natural calamities.

He said on average, around 120,000 people travel by the bus service.

Responding to questions about inefficient rainwater drainage system along the MBS corridor and stations, Abbasi said the project was completed in record 14-months so some minor issues which emerged later are being fixed.

Abbasi also announced that the prime minister would inaugurate the under-construction Peshawar Mor interchange on December 25.

The Capital Development Authority (CDA) Chairman Maroof Afzal also visited several high-rise buildings across Islamabad and announced measures to overcome shortcomings, if found, in prevailing building codes in Islamabad. He added that building standards would be revisited with the assistance of structure and design experts.

Following the chairman’s visit to multi-storey residential and commercial buildings at F-10, F-11 and G-11, the CDA announced it would carry out a survey of all high-rise structures to ascertain if the prevailing building standards met geographical conditions with specific reference to high-intensity earthquakes.

“Building guidelines will be revised in consultation with structure and design experts if need be,” said CDA spokesperson Ramzan Sajid.

During the visit, Afzal met managements and residents of high-rise buildings and listened to their complaints, said a statement issued by the CDA public relations department.

The chairman said the CDA’s emergency and disaster management directorate had constituted different teams after the earthquake to inspect high-rise buildings. “Teams have found issues like improper exits from buildings during an emergency,” it read.

The CDA after having input of structural engineers would study the survey results and revisit the building codes.