Geeta return­ed to her homela­nd, India, after spendi­ng 13 years at the Edhi home in Karach­i
By Our Correspondent
Published: October 27, 2015
Tweet Email 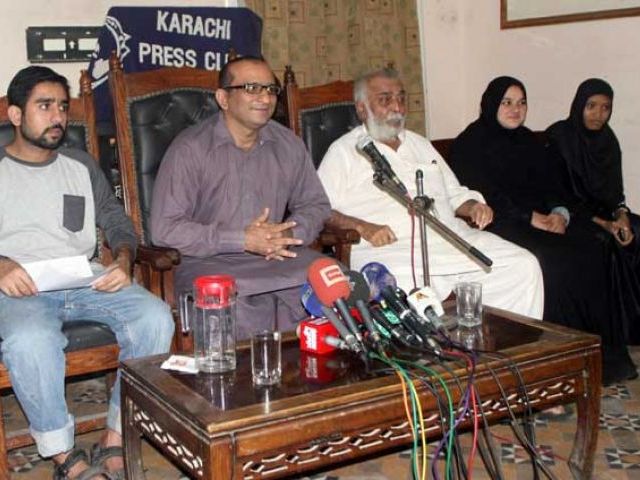 KARACHI: The Edhi Foundation formally turned down on Tuesday the offer of INR10 million from the Indian government as a reward for taking care of Geeta and sending her back to India.

Addressing a press conference at the Karachi Press Club on Tuesday, Faisal Edhi of the Edhi Foundation said that the decision had been taken after consulting the organisation’s founder, Abdul Sattar Edhi.

“We have decided to ask the government of India to spend the funds on the well-being of the deaf and mute people of India,” he said. He added that the decision was based on the foundation’s policy of not taking funds and donations from governments.

Nevertheless, Faisal thanked the Indian premier, Narendra Modi, who had announced on Monday the financial contribution to the Edhi foundation on the return of the hearing- and speech-impaired girl, Geeta, to India. According to Faisal, the Edhi Foundation received news of the donation via Modi’s tweet.

In response to a question, Faisal said that the people of Pakistan give them funds, from which the foundation runs its charity services. He said that earlier, the government of Japan had also offered to donate 100 Toyota ambulances – an offer that was also humbly declined by the foundation.

Faisal also thanked the Indian PM and the External Affairs Minister Shushma Swaraj for giving a warm welcome to the Edhi family in India. He also praised the role of Pakistani and Indian media on highlighting the presence of Geeta in Pakistan.

While complimenting Bilqis Bano Edhi, founder of Edhi Foundation, he said, “I don’t think any amount of words is enough to thank the family for taking care of Geeta with love and affection for so many years.”

Geeta fails to recognise family as hers: Indian foreign minister

“Geeta is their responsibility now. We have officially handed over her responsibility to the government of India.” He clarified that it was Geeta’s wish to go back to India because she wanted to live among her people. “I don’t think she will come to Pakistan again, but she can obtain a visa and come to meet us whenever she wants to,” he said.

Speaking about the return of Edhi family to Pakistan, Faisal said they are scheduled to return on November 2. He said the government of India had offered his family trips to Agra and Ajmer Sharif, but the family will only visit Agra. However, Faisal said he has requested the government of India to find the official birth documents of his father so that his official birthdate can be confirmed.

Earlier on Monday, the Indian premier announced INR10 million for the foundation. Describing the Edhi family as the apostle of kindness and compassion, Modi thanked them for taking good care of Geeta.

While complimenting Bilqis Bano Edhi, co-founder of Edhi Foundation, he said, “I don’t think any amount of words is enough to thank the family for taking care of Geeta with love and affection for so many years.”

PM Modi added that, “What the Edhi family has done is too priceless to be measured but I am happy to announce a contribution of INR10 million to their foundation.”

Welcoming Geeta, Modi said “It is truly wonderful to have you back home. Was truly a delight to spend time with you today… All of India will take care of you.” He also assured her that all efforts will be made to ascertain the whereabouts of her family.