Tragic twist: The family Geeta thought was hers is not

Tragic twist: The family Geeta thought was hers is not 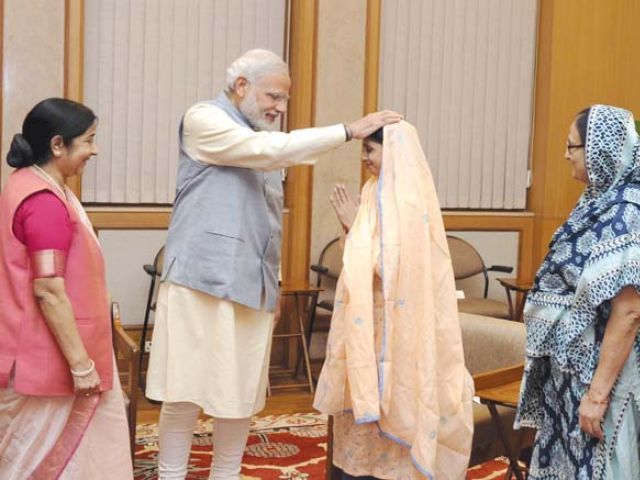 NEW DELHI: Geeta, a hearing and speech-impaired Indian woman who strayed into Pakistan more than a decade ago finally returned to her home country on Monday but soon said she did not recognise the family she thought was hers.

Geeta smiled, waved and fought back tears after landing at New Delhi airport clutching bouquets of flowers and escorted by charity workers and officials.

She was hopeful of being reunited with her long-lost family after identifying them earlier this month in photographs delivered by Indian officials in Pakistan.

But in a tragic twist just hours after arriving in Delhi, Geeta told officials she did not know the Mahato family from India’s eastern state of Bihar.

“She recognised one family after we showed her their pictures. But after meeting the Mahato family today, she could not recognise them,” Foreign Minister Sushma Swaraj said at a press conference alongside Geeta.

Geeta remained upbeat despite the disappointment, with a sign language interpreter saying: “She used to be sad in Pakistan but after coming here she is happy.”

Swaraj said Geeta would be placed in an institution if DNA test results confirmed that the family was not hers and would keep searching for her real one. “The family has submitted their blood samples and Geeta has also given her samples. We will have scientific proof before handing her to any family,” she said.

At the age of 11 or 12 Geeta crossed one of the world’s most militarised borders from India, apparently by accident, and became stuck in Pakistan because she was unable to identify herself or say where she came from.

Geeta, now believed to be in her early 20s, remained under the care of the Edhi Foundation, living in a shelter in Karachi. Even the name ‘Geeta’ was given to her by Edhi staff.

Prime Minister Narendra Modi announced late Monday a donation of 10 million rupees ($155,000) to the Edhi Foundation shortly after he met Geeta, who smiled and hugged the Indian leader’s arm.

“Welcome Geeta. It is truly wonderful to have you back home. Was truly a delight to spend time with you today,” Modi posted on Twitter. He also thanked the Edhi Foundation and Prime Minister Nawaz Sharif for the return of Geeta. “I don’t think any amount of words are enough to thank the Edhi family for taking care of Geeta. They are apostles of kindness & compassion.”