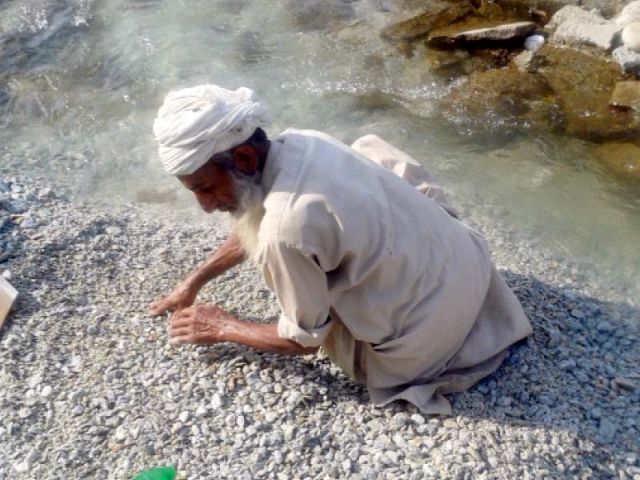 Men search for gemstones on the bank of Swat River. PHOTOS: MUHAMMAD IRFAN/EXPRESS

A rare sight has been witnessed in the remains of an emerald mine in Kabal tehsil; scores of people have started searching for gems. Situated along the banks of Swat River, the mining process had screeched to a halt in 2006 following militancy and military operation in the district in 2006.

Over the past few days, a truck from an emerald mine in Wathki area has been dumping a pile of debris on the site. As a result, people from various parts of the district have thronged to the area to find hidden treasures.

Geologist and emerald miner Moiz Khan told The Express Tribune Swat boasts one of the best qualities of emeralds across Asia.

“Excavation work was at its height prior to 2006,” he said. “However, militant activities and army operations have devastated the entire business.”

Haji Khaima Gul, a resident of Sirsinai village of the tehsil, said scraps from the mines were previously dumped near Kanju Bridge.

“Locals purchased the leftovers from a contractor between Rs800 and Rs1,500 per truck,” he said. “Many locals have earned a large sum of money from rare pieces found at this dumping site.”

According to Khaima, who has been associated with mining emeralds and selling the scraps for nearly 18 years, scraps collected from the mines often included rocks containing veins and arteries of emeralds.

Toti Gul is among those who made a fortune by purchasing mine debris.

Speaking about the practice of collecting scraps, he said it is purely based on luck.  “If you’re lucky, you will find a stone that is worth Rs40,000 or more in the local market” he said.

Returning to the old

Essa Jan, a labourer, also searches for gems and stones in the debris lying on the banks of the river.

“I had left the business in 2006 when the situation worsened,” he said. However, he has recently returned to the field after debris piles have started to emerge once again.

“I was a cobbler over the past nine years but I have special knowledge about emeralds,” Jan said. “Emeralds sparkle in the water so I break larger stones into smaller pieces and then begin washing these stones in the water to search for gems.”

Niazmin, who also searches for emeralds in the piles, said most people find Tiger’s eye – a gem that is worth between Rs500 and Rs1,000 in the local market. He added, “Even if you find this gem instead of an emerald, it can make your day. Otherwise the day’s hard work is all in vain.”

Waqar Khan, a resident who deals in gemstones, said most people prefer not to sell these gems in the market.

“Instead, they smuggle them to India, Bangladesh, Japan, Bangkok and UAE to sell them directly to big buyers,” he said. “Many people sell rough and low-quality emeralds at the price of Swati Emeralds and a common buyer cannot distinguish between them.” Waqar explained that he is not interested in gems that are found in debris. “Locals deserve them more,” he said. “Everyone has a share in these mines and the people who are searching for it deserve them more than any corporation in the region.”

Tasneem Khan, a contractor for a mine located in the region, said they were collecting debris and rubble near the mines. However, the mountainous landscape has made it difficult to accommodate machinery. As a result, the contractors have started dumping debris along the banks of Swat River. “This will provide a better employment opportunity for locals,” Tasneem said.