Mr Ghani, beware of the spoilers within

Mr Ghani, beware of the spoilers within

If Presid­ent Ghani wants to restor­e peace in his countr­y, he should re-engage with Pakist­an
By Naveed Hussain
Published: October 23, 2015
Tweet Email 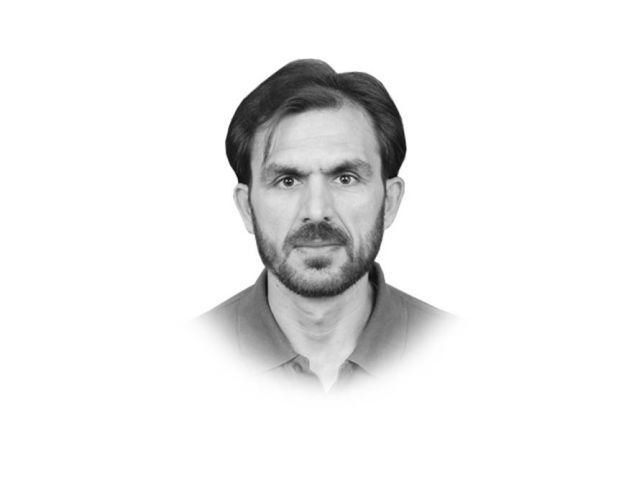 The writer is national editor at The Express Tribune naveed.hussain@tribune.com.pk

Former Afghan president Hamid Karzai has scuttled his successor’s efforts to reconfigure his country’s troubled relationship with Pakistan. By all accounts it seems President Ashraf Ghani has given in to the Karzai camp. He has started speaking in the tongue of his predecessor who, while in office, built a reputation around his frequent anti-Pakistan rants. The Ghani Administration has blamed Pakistan for the uptick in Taliban violence. It has also refused to resume Pakistan-brokered peace talks with the Taliban. And instead has called for Islamabad to “give up Taliban sponsorship” to qualify for the role of negotiator. But how did the Karzai camp nip the Islamabad-Kabul diplomatic romance in the bud?

Karzai was also known for his India-leaning tendencies during his presidency. Some in the Pakistani officialdom even called him a “pawn of India”. And this was not without reason. The Afghan leader publicly professed his love for India — a country he called his second home because he lived there in his younger days, received university education and has a wide circle of friends there. At the diplomatic level, he signed a strategic partnership agreement with New Delhi knowing well that it will alienate Pakistan, which sees growing Indian influence in Kabul as a strategic threat. After Karzai retired as president, Indian analyst M K Bhadrakumar went as far to say that “his retirement literally handicapped India’s Afghan policies and rendered them ineffectual”.

Though retired, Karzai has not exited the Afghan political scene. His presence in Kabul, close to the presidential palace, is formidable, and foreboding for the Ghani Administration. Some Western diplomats believe Karzai, who has styled himself as the father of the modern Afghan nation, is still pulling the strings with the help of his former aides and a wide range of connections — both in Afghan society and administration. They even accused him of “creating a shadow government and actively plotting to destabilise the establishment with the intention of bringing it down” so that he could step in to fill the power vacuum thus created.

Why does Karzai want to undercut Ghani? There could be more than one plausible reason. The most important being Ghani’s move to sideline Karzai’s former aides, his reluctance to warm up to Karzai’s second home [read: India], and his decision to start a “new beginning” with Pakistan — a country Karzai had been demonising throughout his years in power.

Karzai opposed Ghani’s decision to send Afghan military officials to Pakistan for training. The Ghani-Karzai conflict, however, came to a head when Afghanistan’s National Directorate of Security (NDS) signed a memorandum of understanding (MoU) with Pakistan’s Inter-Services Intelligence (ISI) to improve intelligence-sharing between the two spy agencies. From the Afghan side, the MoU was signed by a deputy director general of the NDS after the agency’s chief, Rahmatullah Nabil, reportedly refused to sign the unprecedented deal. Nabil is a former Karzai aide. His hostility towards Pakistan is no secret — and he doesn’t hide it either. Under his watch, the NDS had attempted to recruit Latifullah Mehsud, a top lieutenant of Hakimullah Mehsud, the slain chief of the Tehreek-e-Taliban Pakistan. Nabil publicly admitted to the attempt to cultivate Latif “to send a message to Pakistan”. Another Karzai ally, former NDS chief Amrullah Saleh, said he “would have been ashamed” to sign such an agreement.

Nearly a month after the NDS-ISI deal, Pakistan brokered a rare direct meeting between Afghan officials and Taliban representatives in Murree. The Murree Peace Process, as it was officially named, generated a lot of optimism as it enjoyed the blessings of key world powers like China and the United States. Tellingly, Karzai’s reaction was ambiguous, because the peace initiative catapulted Pakistan back into a mediatory role in Afghanistan — something that was not acceptable to the Indian establishment which had invested heavily in Karzai’s Afghanistan.

An op-ed piece in the Indian newspaper The Hindu stated that New Delhi “will convey our unease and concerns, but quietly, and only to those willing to listen”. Islamabad was aware of India’s frustration. And it forewarned that “detractors and spoilers” would try to sabotage the nascent process. Two days before the second round of talks, some “Afghan officials” leaked to the BBC that longtime Taliban leader Mullah Omar had died two years ago. Nabil’s NDS was quick to confirm the news. This leaves little to speculate on who could have been behind the leak. The damage was done. The embryonic Murree Peace Process was aborted — much to the dismay of Islamabad, Beijing and Washington.

The collapse of the Murree initiative was followed by an upsurge in Taliban violence in Afghanistan. And the Karzai-era blame game came to bedevil the Pak-Afghan relationship again. It is high time the Ghani Administration realised that chaos and instability in Afghanistan will only help the cancer of terrorism to metastasise, which Pakistan, being itself afflicted with, will never want. If President Ghani wants to restore peace in his country, he should re-engage with Pakistan and disengage policymaking from the influence of those doing someone else’s bidding in Afghanistan.