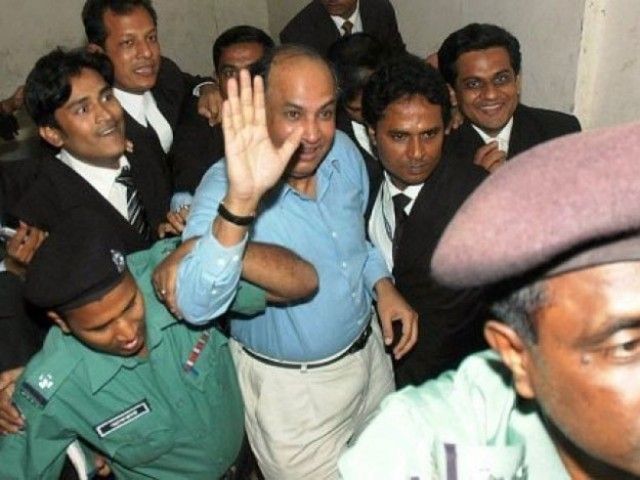 ISLAMABAD: Government of Bangladesh has banned the entry of five Pakistanis who had shown willingness to appear as defense witnesses in case against death penalty to former senior opposition leader, Salahuddin Quader Chowdhury.

Talking to The Express Tribune on Thursday, former minister Ishaq Khakwani said the tribunal refused to entertain their affidavits and defence has now approached the Supreme Court of Bangladesh against the decision.

They had sent their affidavits to the tribunal to appear as witnesses.

“We are protesting Bangladesh government’s decision for barring us at every forum,” Khakwani said.

He also questioned how the ‘international’ war crimes tribunal, was not allowing international witnesses.

He hoped the apex court of Bangladesh would accept their plea to entertain the affidavits for recording statements.

Interior ministry of Bangladesh also sent a letter to international airport immigration police, providing them with the names and photographs of the five persons, aimed at putting them in the blacklist.

Chowdhury was awarded death sentence by a tribunal for alleged war crimes during the country’s 1971 conflict against Pakistan.

It was set up by the Awami League-led government in 2010.

Tribunal’s chairman Justice Fazle Kabir had: “We are of the unanimous view that the accused deserves the highest punishment for committing such crimes that tremble the collective conscience of mankind.”

The judge had declared that Chowdhury should be “hanged until death”.

But human rights groups and the BNP both said the tribunal had fallen short of international standards.

Later, Chowdhury filed a review petition against his death sentence as well as a list of eight witnesses to defend his case.